Time flies when you are having fun!

Just when I was getting in a groove posting several days a week, I disappear again.  I know.  I hate when life sort of takes over like that.  Not that it's totally a bad thing, but really - I always find it's when I have the most to say that I end up not writing.  How does that make sense.
Friday night we had my cutie pie little cousins over for dinner and video games.  Let me rephrase that, not so little.  Little to me, but they do happen to be that whole tween/teenager age.  Pretty big age difference from my guys but they all get along so great I love it.  Fully confident that if my guys could actually pick some big brothers, it would be my little cousins.

Saturday the boys finally got the haircuts I had put off for months.  Seriously.  I love the longer moppy hair on little boys... but trimmed nice.  It was not looking so nice.  Past their ears, getting a bit out off control.  They were complaining.  (Because I have the only kids in the world that love the dentist like it's Disney World and ask for haircuts.)  The Big Guy sits in the chair and asks for spikes.  Then it's the Bunny Bee.  Looks the girl at Snip-its right in the eye and says 'Uh, I want Incredible Hulk hair.'  We exchange glances and the hairdresser says 'What?'  My 4 year old proceeds to break it down for her.  'I want incredible.hulk.hair'  Hysterical and mortifying at the same time.  The Big Guy tries to help him out and says ' You know Mommy, like this'...and points out a jagged line across his forehead as if to show us how it should be cut.  Somehow we convince him it's the same haircut the Big Guy has and suddenly he's OK with it.  Then the Doodle Bop.  That poor guy didn't have a choice after the whole cutting a chunk out of his own hair incident... spikes for all!!! 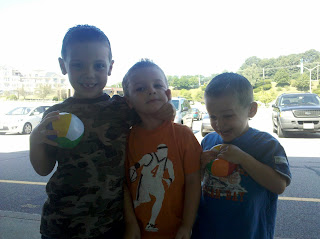 Monday 2 girlfriends, our 6 kids and I all had lunch at Newport Creamery.... for nearly 2 hours.  Love love love the creamery.  Have been going there since I was a kid, then after dances and on dates... now I take my kids.  Have never ever experienced such horrible service.  4 kids meals (2 kids were too small) and 3 sandwiches took awhile to get to us.  It was busy though not packed.  Waitress never came back, not with an extra drink that was requested (until nearly a half hour later after the meal was done and left), never to check on us again.  Even a manager got chased down about the kids ice cream and nothing.  Don't even get me started on the waitress picking the kids ice cream choices (crazy vanilla for everyone) or waiting on the bill.  Had that been our 1st experience there?  We would never ever go again.  With Pinkberry opening up it made me sad they weren't a bit more... friendly lets say.  My guys asked to skip the creamery next time and just hit Pinkberry.  All in all I can not say enough how well behaved all of our poor kids were waiting for so long.  They were wonderful! 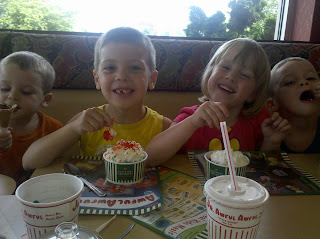 And today.  Whew.  Are you tired yet?  I am.  Super cousin extravaganza at Chuck E Cheese before the girls go back to Texas tomorrow.  The kids had a really good time and I was beyond thrilled that the place was not at all busy.  At the end we asked them all to get together for a photo and these stinkers lined themselves up in age (as well as height) order.  Too funny.  Love getting them all together, wish it could be more than just summers.  The boys are already looking forward to when they come back next summer. 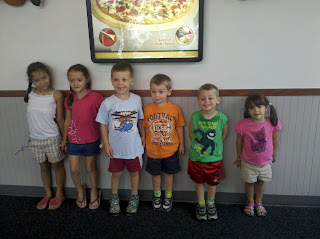 Tomorrow?  The Big Guy will be spending some time at work with Daddy and his crew while the twins and I head to Hasbro's Fun Lab with one of their friends to be little toy testers!  Which I will talk a little about here but cover more for The Mommy Gamer.