New memories, that's what I wanted out of the long weekend.

Saturday was my first actual outing since the surgery (not doctor appointment related) so we took it easy.  Just the grocery shopping did me in.  Sunday we took the boys to the Columbus Day Parade on Federal Hill, after making a stop at this little wine making place in Providence so Al could pick up a part he needed.  The parade was packed this year which probably had everything to do with the 86 degree weather.  When I tell you every year it's freezing at this parade or it rains I am serious.

It was so hot the boys barely made it through half the parade (in shorts and t-shirts).  After leaving the parade we walked to Pastiche to get the boys a snack and to cool off in the air conditioning (I repeat, in October - in New England).  We took the boys to Al's parents house after that.  I have no idea how it happened but I was sitting in the grass one minute and Al was taking some target practice with the air rifle (nowhere near the boys) and the next he's giving me the look as the kids stand around wanting to shoot.

Somehow my no way's turned into a fine but they don't do it themselves and you better go over safety rules (I blame being off pain meds a full day).  I have to hand it to him though.  While I still feel like they are way too young, Al grew up shooting an air rifle and he did a good job scaring them a bit with the rules and how even though it's not a gun gun we still never ever touch without Daddy ...and more.  They each got a little lesson on how to hold it with Daddy and one shot at a can. 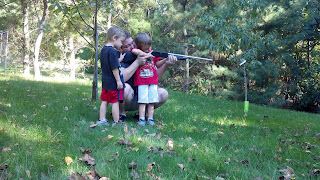 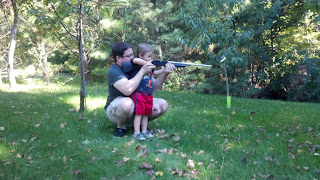 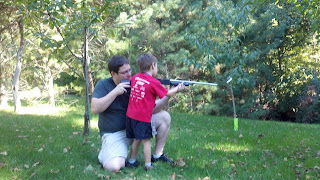 Guess who's a lefty.
After that I think Al saw I was about ready to have a heart attack and he put the air rifle away.  The boys stayed a few more hours to play and help finish decorating the house for Halloween.
Monday was so nice to have Al home from work for the day.  We took the boys to Target and let them get their Halloween costumes.  I am so proud.  $28 for 3 kids.  I'm almost embarrassed to say we usually spend over $60 on all 3 because when it comes to the costumes they've been animals from Old Navy and the more expensive super heroes from Target in the past.  This year?  They decided on a Vampire, Frankenstein and a Skeleton.  What's easier than that!  That afternoon Al took them to play soccer and that night I made my first real dinner (not just thrown from the freezer to the oven) in weeks.  What was the highlight of the day?  The boys getting to "help" Al transfer the last big jug of wine into gallon bottles now that we are making the new season's wine.  I think they got to take turns holding the funnel or something, I don't know.
I was so worried these three kids would go back to school today talking about shooting air rifles and wine.  I just knew I would be getting a call from the school asking what we did this weekend.  I held my breath as I dropped the boys off.  As I was rounding the corner I could hear the Doodle Bop (who isn't even the chatty one) loudly telling everyone how he went to a parade this weekend and saw really big puppets and had cookies.
Phew!  Dodged a bullet there, huh?
Oh Lord.  I'm about to start going gray even faster, I can feel it.﻿
Posted by Liza at 8:21 PM