Last Saturday we had an amazing day.

As I mentioned, we were lucky enough to attend the CVS Caremark All Kids Can Patriots Day at Gillette.  The Dana Farber Field House to be exact, due to the freezing rain and sleet.  Having never been in there before I could not believe how big it was!

The Big Guy got checked in, put on his shirt and off we went to mingle a little.

Along came former Patriot Jon Williams (from the famous 1985 Super Bowl game against the Bears that I remember to.this.day! ...which says alot since I was like 7 maybe?) and he went right over to the Big Guy.  Very sweet.  Joking with him, trying to get him all excited.  But the Big Guy was not budging - started out super shy.  Did not want to smile or speak to anyone.  Which was really unlike him.  I think maybe he was just trying to take it all in.

Before the events really got started I got a chance to meet some really nice moms, including fellow blogger Kristin Macchi.  As we were standing around chatting Jon teased us about our shoe choices for the day and told us we had to be ready to play.  He then threw the ball to us.  I caught a football from a Pats player and even got to throw it back!  So awesome!

Jon was then joined by former Patriots players Patrick Pass and Max Lane.  They got all the kids together and had them run through the giant inflatable football helmet.  Which was so cute!  Most of the kids ran through cheering, the Big Guy just kind of held onto his pants and went right past us.  They led the kids in group stretches and then some drills on the field before breaking everyone up into one of 3 groups.

The Big Guy's group went over to Max Lane's station first.  A little blurry, but this is one of my favorite photos from the day.  The Big Guy rushing Max and knocking him over.  (That man spent like 3 hours being repeatedly knocked over by kids.  I give him so much credit, he must have been exhausted.) 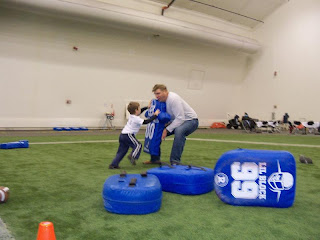 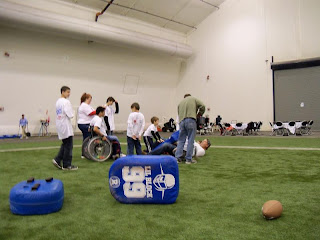 After Max's station, we moved to Patrick's.  Which just so happened to have some of the Patriots cheerleaders at it.  I would call this the station where the Big Guy finally opened up.  Being one of the youngest ones in attendance and so quiet, the girls were all over him.  And once he realized that he barely left their sides.  They even cheered him on while he threw the ball. 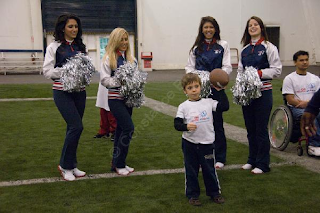 Once that happened he sort of stopped waiting in line and just kept reappearing at the front again. 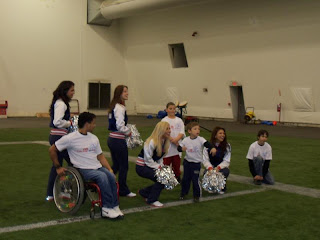 After that Al and the Big Guy got interviewed for the local news (while I stood behind and snapped a photo because I got a little bit of stage fright). 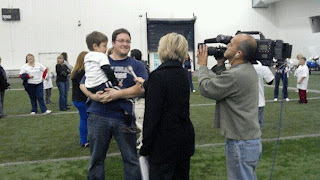 We moved on to the last station with Jon and even Al got to get out there and helped with the kids a little.  Which had the Big Guy finally smiling. 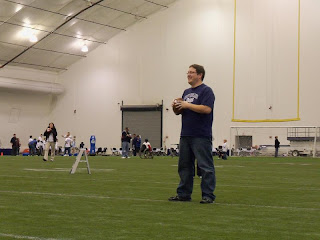 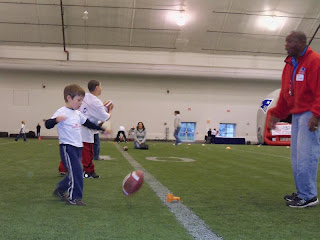 In the end Jon, Patrick and Max wrapped things up by bringing the kids in and talking about the day.  Jon even did a dance for the kids while singing 'We Are Family'.  Definitely made me smile and I wish I had thought to film that part. 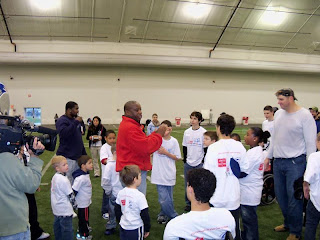 Everyone got together for some group photos.  The Big Guy is down in the front. 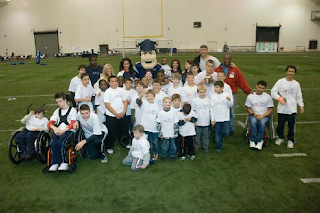 Then it was lunch time!  Which was also amazing.  Yummy sandwiches, fruit, a snack... and they were great with the Big Guy's allergies making sure he had something special.  It was really nice. 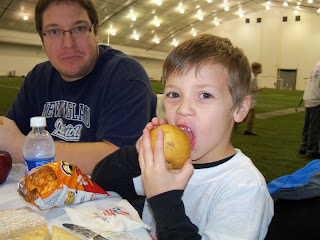 During lunch we got to get up and get our photos taken with the players and cheerleaders.  The Big Guy got a bunch of autographs and one of the cheerleaders let him sit on her lap.  (Mommy is so not ready for this yet!) 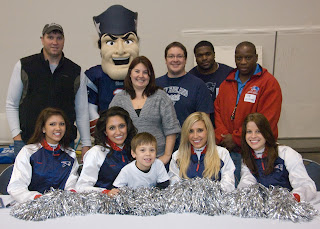 He got awesome swag!  A CVS gift card - backpack filled with snacks, water bottle and two disposable cameras - and tickets to the Hall of Fame. 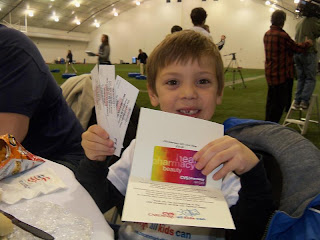 He had so much fun, we really just had a great day. 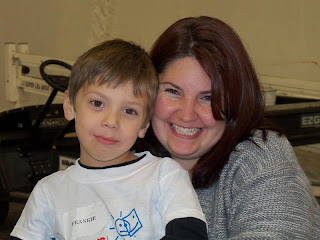 At the end we said our goodbyes, bundled up and braved the sleet and snow to hit the Hall of Fame. 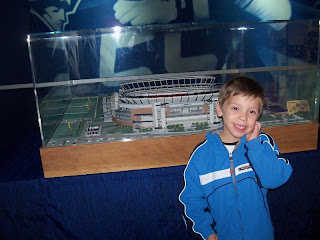 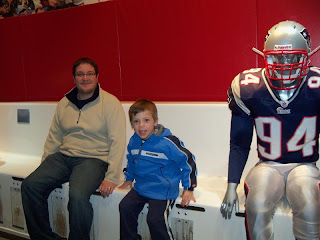 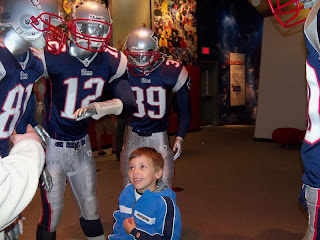 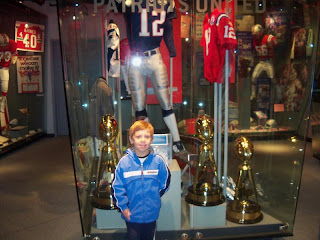 And the best part?  When the Big Guy got handed that Super Bowl ring. 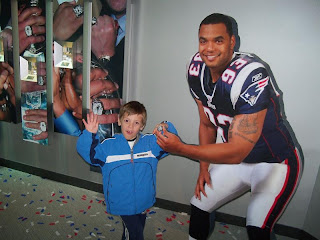 This is an experience we will definitely remember forever.  A special thanks to the CVS Caremark All Kids Can program and the New England Patriots for making it all happen!
Posted by Liza at 7:49 PM