I don't remember when I first heard it.  Or who it was I heard it from.  But I do remember being small and hearing the whole weddings and funerals sort of thing.  Being tied in with how I was Italian.  That it doesn't matter how long it has been since you have seen someone, if there is a wedding or a funeral you are There.

Not always the case I know, but it makes me smile.

The last few days it couldn't have been more true.

Yesterday my Grama and Aunt Sharon flew in from Florida so I pulled the boys from school a half hour early so we could surprise them at the airport.  That afternoon Al and I left the boys with my mother and father in law so Al and I could attend the wake without them.  I just felt like they weren't quite old enough for that yet.

I was amazed at all of the people.  Some we had not seen in years.  So many I didn't know.  Some who knew me...but I was so small at the time I could not have told you who they were.  And then there was that one cute little old man with the snazzy cap and cane who Al and I convinced ourselves would be perfect for my Grama.  And they were getting along so well....  only to have my Grama flag us over and introduce us to her long lost cousin.

I guess that set up is out.

We went to my Uncle Stanton's after the wake and I tweeted last night before I went to sleep how I was feeling guilty for having such a great time with all of my family.  Because it wasn't for a happy occasion.  But it was so freaking nice just to spend time with everyone.  Becky and Sarah made me feel better about it... but I still had that nagging feeling today.

Dressed up the boys and we were out the door by 9:30 this morning.  We all met in the church parlor (growing up in the Catholic church I had no idea such things existed) and the pastor was incredibly nice.  My cousin Leah did a reading and my Aunt Sheilia gave a beautiful eulogy.  I kept thinking how I was sure my aunt would have loved all of this... except she was missing it all.

Going to the cemetery with the boys was tough, but I was so proud of how they did.  Once we got to the Yacht Club, I think they - along with everyone else - finally relaxed.  By the end of the afternoon as everyone was leaving, my cousins were playing with the boys.  I couldn't help but start taking photos.  Which I then continued to do more of when we all hit my Uncle Stanton's again afterwards. 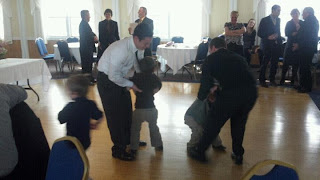 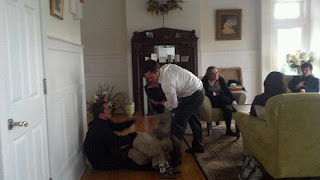 We did just have Terranova Christmas a few months back, but I couldn't help but think about how I wish we could do this more often.  Have everyone together... but for happier occasions.  Not because someone passed away.

The boys had so much fun being around everyone that the twins fell asleep in the car just before 7pm on the way home from Westerly.  The Big Guy stayed up till we got home, but he was asleep as soon as his head hit that pillow.

To my family, it was wonderful seeing each and every one of you.  And I hope we don't have to wait so long to do it all again - under better (happier) circumstances.
Posted by Liza at 8:07 PM