Yesterday was our first 5K run as a family.  The St. Pats 5K.

We registered on a team of high school classmates in honor of my friend Barbara.  Al and I had our official race numbers and shirts and we decked the boys out for the St. Patty's themed run from the shirts to the ties to the green spiked hair.

The boys were so excited to get to play games before the race from Dave and Busters and to meet Paws from the Pawsox. 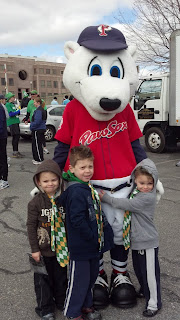 The crowd got really large by the Statehouse - and it was freezing cold.  Which made the boys a little less excited to wait for the race to start. 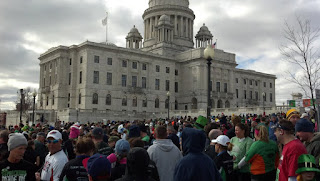 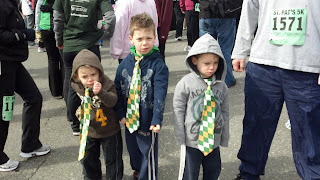 See how excited the Doodle Bop looks?  (Sarcasm)
We were pretty far back from the start once we got in line for the race. 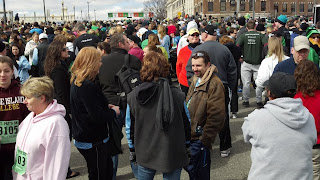 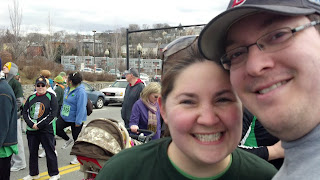 OK, so see the Bunny Bee stretching his heart out right here? 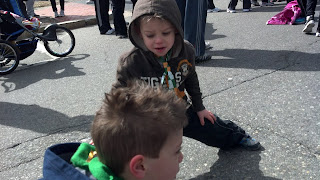 We had already decided we were pretty much walking this 'race'... this should have been a sign how the Bunny Bee was taking that news.  Once we made our way up to the starting line, he took a look at all the people in front of us and broke free from our hands.  Off that kid went, zigzagging through a crowd of tall runners.  Al and I looked at each other shocked as we yelled for him to wait and the other two boys took off after him.

And suddenly we were all running this race. 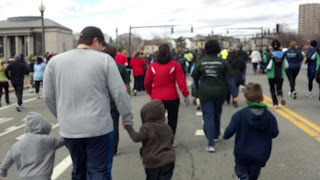 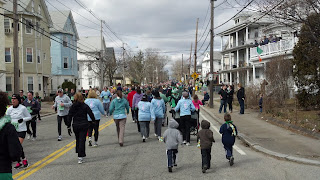 I have to admit, it was pretty cute.  Those kids ran for over the first entire mile.  It was Al and I who were having trouble keeping up with them.  OK, mostly me.  But hey, I was still freaking sore from Boot Camp class at the Y on Thursday!

The Big Guy fell a few times, but didn't let it stop him.  He would get right back up and go.  The boys loved the people that stood on the sidelines with their hands out to high five them.  I really liked how people encouraged my little guys.  Just before the halfway mark, the Bunny Bee was finally exhausted.  I told Al to go ahead with the other guys while the Bunny Bee and I finished the walk at his pace.

I should tell you his pace was alternating walking super slow talking about all the things in summer that make him happy, repeatedly asking me when we the end of the race would be, and asking me to pick him up.  That's right.  I carried that kid on and off towards the finish.  That's him on my hip (as a photographer on the sidelines told me I messed up his photo of us because it was now him taking a picture of me taking a picture of us).  My bad. 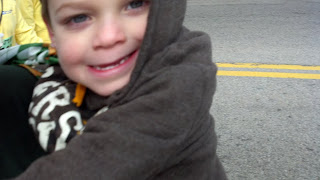 I was so proud of my guy though.  Once we could see the Statehouse again and had the finish line in our sights, he held onto my hand and we did a slow exhausted run to the finish line as I kept saying how proud I was.  And while it was close, we still made it in under an hour.  Pretty awesome if you ask me.  Al, the Doodle Bop and the Big Guy were waiting for us at the finish.

It turns out Al had to give the Doodle Bop a piggy back ride towards the end, but the Big Guy?  Ran just about the whole entire race.  Amazing!  Huge accomplishment for him.  On the other hand, the twins have decided they never ever want to run a long race like that again.

Last night we were all in bed early.  I'm still sore today, but proud that we all finished.  Not bad for our first try.  This morning the Doodle Bop made me take his picture with his Dave and Busters prize from before the race.  Hey Mom, make sure you blog that! 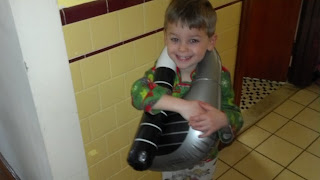 I've created a monster.  That child just told me what to put on my blog.﻿
Posted by Liza at 11:08 AM