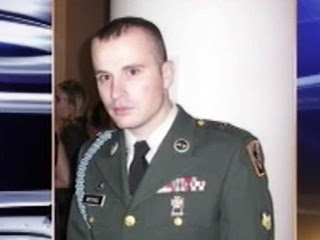 He died while pulling a child to safety who had run in front of a military vehicle in Afghanistan.  He pulled the child out of the way, but got stuck himself and succumbed to his injuries.

So very sad.  I haven't been able to stop thinking about his wife and three small children ever since I heard the news last week.  Though we are from the same small state, I did not know Sgt. Dennis Weichel or his family.

This morning after I picked the boys up from school, I had to run a quick errand in East Greenwich.  As I hopped on 95 South I was struck by all the flashing lights and traffic stopping up ahead.  What I first thought was an accident, turned out to be Sgt. Weichel's funeral procession to the  Rhode Island Veterans Cemetery in Exeter...one exit further from where I was going with the boys.  And we were only a few cars back from the end of the procession and police cars.

The boys asked what was going on as we drove slowly and stopped here and there.  I hated having to explain what was going on.  As soon as I said funeral procession they nodded and replied 'Oh like Auntie Lo's'.  They had so many questions...who was it, what happened.  Normally we wouldn't know those answers but since I realized that this time I did, I decided to use it as a bit of a teaching opportunity.

Remember how I always tell you boys that cars and trucks can not always see kids?  Which is why you should not be in the street by yourself, or anywhere near them if they are moving?  They nodded.  I explained that a service member from our state was in another country protecting people and he saw a child run into the road in front of a big truck.  He pushed the child out of the way, but he could not get out of the way in time and he was hit...and went to Heaven.

He's a hero, I explained.  It is sad he went to Heaven... but he saved that child's life.  I explained that when someone really important - a hero - passes away, we fly the flags at half staff like they had noticed and lots and lots of people and police cars go to the cemetery to show respect.

Up ahead at an overpass I could not quite make out what was going on.  We got closer and I stopped breathing for a moment, a lump formed in my throat.  An ambulance and a firetruck were parked above, with all of the firefighters and EMT's standing up on the very top of the fire truck to watch as the procession went by underneath them.

The boys asked if they could see a picture of Sgt. Weichel later and I told them I would pull it up on the computer so they could see.  The Big Guy also noted that while he did see lots of flags at half staff like we talked about, he saw a few that were not...and that was just not right.  The twins agreed that they should all be down half way.  Every single one.