On fevers and not being at the beach

OK friends, things are back to being crazy - as usual.

I have like 10 half finished posts almost but not quite ready to go... and the Big Guy is still sick.  I know, last we chatted it was the Bunny Bee that was sick.  (And before that, the Doodle Bop.)  It's been nearly 3 weeks of one kid sick at a time...and I am so tired.

Sunday the Bunny Bee was finally better and that night I promised the boys that we would be beaching it in the morning - and the day after that as well if the weather stayed good.  Which you know means that the Big Guy woke us up early to say he had a headache.  He only gets those when he has a fever coming on.  And sure enough, the thermometer read 100.  I wanted to cry.  The temp has come and gone over the last 3 days ... from nothing to 102 to nothing again.  I would be worried if the Bunny Bee didn't just come off it.

The kids are miserable we have had to stay in.  Last night I didn't say a thing to the kids, but planned to get them to the beach for an hour or so this morning.  It wasn't going to be good weather, but at least I could get them there before the storms.  You know that means we woke up to torrential rain and thunderstorms.

We will just have to see what we can squeeze in...away from other kids that is.  I need to get these boys off the couch that they have sort of made their new home base on. 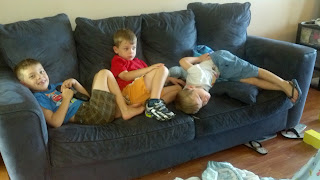