Brotherly love ... or not

I don't even know where to begin talking about yesterday.  Nothing on my schedule aside from school, taking the Bunny Bee to the pediatrician in the morning and Mingling Moms at night.  Little did I know how busy the day would get.

The Bunny Bee has complained on and off for two months about knee pain that comes and goes.  I have to be totally honest and say that while we have been keeping an eye on it, my husband and I really did not take him seriously.  He will say OW! and start limping or crying out of nowhere.  It started to seem like it was for attention, but it was nagging at me at the same time.  I didn't see anything ... but what if there was something?

For the last week the Bunny Bee actually counted down the days until his appointment with the pediatrician.  And the other day?  He came home from Kindergarten and told me he informed his teacher he probably wouldn't be in school the next day because he was getting his knee checked out.  I assured him he would be at school, that the appointment was two whole hours before Kindergarten.

Little did I know...

Pediatrician was running about 40 minutes late... and when we did get in, she noticed the knee was actually swollen.  Cut to me feeling instantly horrible.  It could be a few different things and the first thing she is questioning is Lyme.  I don't even know how I feel about that one.  Not only have I never pulled a tick off any of the kids, I have never seen a rash or anything else that would seem to go along with that.  I'd like to think there is no way I could have missed that...

She gave us orders for blood work and x-rays and he burst into tears when he heard the word blood.  We decided it was best to get it done immediately and drove down the road - he even decided blood work first to get it over with.  I was so proud.  Until he started screaming and crying when I pulled into the parking lot.  Did I mention I drove over a curb in the chaos?  Don't tell my husband that...

I parked in the first spot I saw and carried him in.  The Doodle Bop was in rare form.  Seeing his brother such a mess, he got unusually chatty.  And so freaking funny.  Oh my God, is that a really old computer?  I have never seen a computer so old! he said to the lab tech.  Followed by Mommy, I don't want to watch them take the blood out so I'm gonna stand outside the room.  Cause I don't want to see any of that. OK?  And things like that on repeat - loudly.  I could not stop this child from talking and he was making it so much worse for the Bunny Bee.

When it came time to go into the small room to take the Bunny Bee's blood, he had a flip out like I have never seen.  And trust me we have had some epic ones.  This beat them all.  No NO NO NO!!! he screamed and curled up into a ball as I tried to take his TWO jackets off...because he felt like wearing two.  Me and two nurses holding him down.  He is screaming bloody murder.  And the Doodle Bop is outside the room but right near the doorway, hands over his ears, giant smile on his face yelling Mommy! Mom-ayyyy!!!! Are they all done taking the blood out yet?  It was sad and hysterical at the same time and everything in that office stopped with the commotion.  I felt so bad for everyone else waiting.

When the Bunny Bee was all done they offered the boy stickers.  He declined, but the Doodle Bop stepped right up.  I was here, I'll take a sticker!  And then he proceeded to tell his brother that he hurt his ears with all the screaming.

From there we drove over to the imaging place and waited for the x-rays.  But not before the Doodle Bop stopped before getting in the truck Uh oh Mommy LOOK what you did!  I look at where his finger is pointing and I see I'm parked in a handicapped spot.  In my defense there was no sign up, but I missed it on the ground with all the tears.  You know its bad when your five year old points it out.

Waiting for the x-rays, I had Al call the school to tell them the boys would not be making it... things were taking too long.  Told you Mommy, I knew I wouldn't be at school today! the Bunny Bee beamed. Who knew my child was also psychic.  As a kid who has had his share of x-rays already, he was almost too excited for this part.  Putting on the tiny johnny? Cuteness overload.  I wanted so much to take a photo, but I restrained myself.  Garden City Treatment Center with the nice staff who watches siblings this place was not, and because the Doodle Bop was with me, the Bunny Bee had to go in alone.  I was so proud of him.

They actually handed us the x-rays of his knee when we were done and told us to take them back to the pediatrician.  And off we went.  She took a look for us and apologized that we were sent back to her, she gets a copy too and told the Bunny Bee he could keep these.  You would have thought this child won the lottery he was so excited.

With only an hour left of school at that point, I took the boys to Target for a ride in the big cart, Icees of choice and a nachos Lunchable for behaving as good as they could considering the day we had.  Lunch of champions right there.  Now all we can do is wait for the blood work to come back and go from there.  Today the boys wanted to take the xrays out and take a photo with them.  We tried to put flashlights behind it to light them up but you can see that didn't work so well. 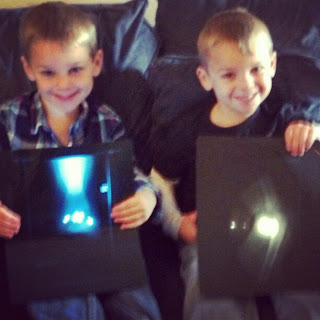 The boys want the Bunny Bee's x-rays taped to their bedroom door because its sooo cool!
Only my kids...
Posted by Liza at 12:59 PM