No kindergarten love for kale

Thanks to Pinterest and what seems like everyone I know making Kale chips, I tried to hop right on the wagon. I'm not a fan of raw kale, but this sounded like something I could make. For $1.99 at BJ's, I bought a giant bag of triple washed and already torn kale yesterday.

I thought I'd start small so I only used half the bag on the first attempt. Some olive oil, salt and 12 minutes in the oven later? We had these.

I scooped them into a bowl and brought them out to the boys who were all surprisingly OK with trying them. Not going to lie, it was probably because I used the word "chips". The Big Guy dove right in and told me he really liked them. As in it would even be OK if I sent him to school with them sometimes for snack. (I know, I almost fell over.)

The twins had different ideas. See their faces as they started to taste it?

Yeah. Not fans. Not at all. 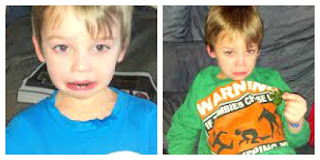 You can almost hear their thoughts. Mommy, the stomach flu was bad enough this week...now you made us try kale?