So the Blizzard started out as all fun and games. School was cancelled on Friday. I made meatballs in the crock pot. We took stuffed Nemo outside and made a video in the dark with the kids. Later I joked that Nemo was driving me to drink with the way the power was going on and off... and on and off. 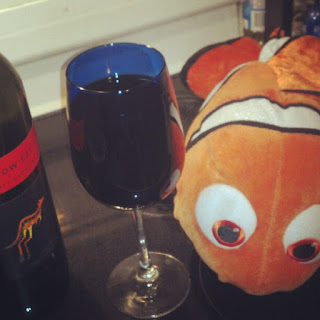 By midnight it wasn't that funny anymore. Power was out for good, boys were awake and in bed with us and it got really cold really fast. We waited it out at home this morning, hoping the power would come back on. I took out the few things I thought I could save from one of the fridges and put it out in the snow.

The boys desperately wanted to go out and play in the snow and it was hard to tell them no - they would come in cold and wet and we would not be able to get them warm. We did bundle up while Al finished shoveling and I let them take a little walk. They have never seen snow like this in their lives. 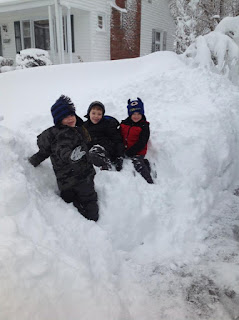 Posing on the side of the driveway where the snow is way over their heads. 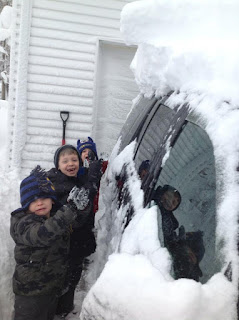 Pretending to worry the snow from the top of the truck would fall on them. 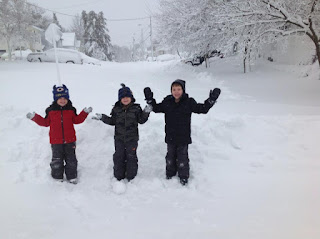 This one is hard to see. Our road was not plowed. The other street was. The snow is past their waist. 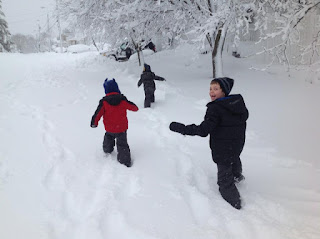 Heading back to the house. Love the Big Guy's smile.

After lunch it was so cold inside, we packed up and headed over to Al's parents - ban on travel be damned. I was feeling irate without heat and the twins were starting to cry. Getting there made all the difference. Heat! Fireplace! Food that isn't cold! And best of all? The boys got to play outside.

Tonight is a big sleepover - all three boys in one room. They crashed out early after getting so little sleep last night. My house is still without power and I am not at all thrilled at the prospect of cleaning and throwing out two entire fridge and freezers worth of food. For right now? I am so thankful for somewhere else to be.