An ode to my car

Skipping Wordless Wednesday today. Instead I'm posting a goodbye to my car.

My 2000 Chevy Cavalier. Once it was an oh so sparkly silver. Though I had been through 3 cars before it, it was my first really new car. Just one year old, Al sat at the dealership with me and told me he was co-signing my loan because he wanted me to have a good car. I remember tearing up and telling him no. We were not engaged, we didn't live together yet... and yet he was willing to do this for me. That was 2001.

It had dark tinted windows that the dealership kept rolled down during an inspection so we could keep it. The back windows had butterflies etched into the tinting. It was like it was made for me. I was so proud to own that car.

In 2004 Al and I were married. In 2005, it was the car we put the car seat in for the first time and brought the Big Guy home from the hospital in. Four months later we bought the truck I drive now and Al took the Chevy. He wanted the Big Guy in something bigger and safer. The Chevy never could fit all three car seats in the back so it was a treat for the boys to once in a while get to ride in Daddy's car - one or two at a time.

And here we are. 2013. The window tinting shriveled and had to be pulled off. The butterflies are long gone. The paint is faded and chipping. The car is literally falling apart - to the point we couldn't even trade it in or sell it. That's right, we loved it to death. (And all the years of Al driving to work between MA and Newport had taken it's toll.)

Last night Al bought a much needed new car and we set the Chevy up to be donated tomorrow. I had the boys stand outside the car one last time. The car that I brought my very first tiny baby home in. 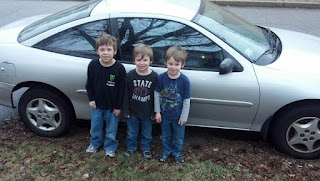 And then we checked out Daddy's new car. 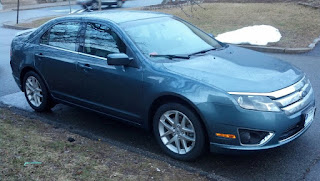 Say hello to Al's beautiful blue 2011 Ford Fusion SEL with the heated seats (which are heaven by the way), gorgeous interior and a back seat that all three boys fit comfortably with booster seats in. Look how excited these kids are! 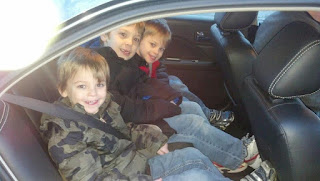 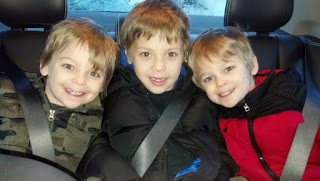 It took so long to pick up the car today that we skipped Hockey and took a ride around with the boys. They are in love. A car payment again certainly stinks, but I am thrilled that Al is in a safe car again. And that we finally have two cars that all three kids fit in.