Preparing for the puppy

I have so many things I want to write about lately... but only so much I can say. Which is when I stop writing as much. And I hate that. I get sidetracked by what I want to talk about but can't, and forget to focus on the stuff I can.

In case you missed last week's Facebook announcement, we are bringing home a puppy in a few weeks. Surprising the boys and everything. A friend of ours has two purebred American Bulldogs - that had two puppies last month. Al and I spent some time talking it over and I picked one out. 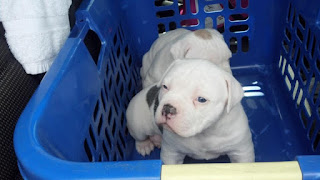 How freaking cute is he!!! They are BOTH adorable. And so small right now that two of them fit into a laundry basket with extra room. Which one to pick was not the easiest choice. I fell in love with the little gray spots on the side and back on this guy in the front and that was it. He was mine. (Did I mention he let me hold him like a little baby too?)

Right now his name is Champ. Al thought we would leave it up to the boys whether we keep the name or change it. I told him no way could we do that, they will come up with Poop ... or Cuddles ... or something else crazy.

Want to know how well I know my kids?

Over the weekend Al told the boys he was thinking of changing his name and he was taking suggestions. The Doodle Bop told him he should change it to Poop.

This morning I was at Target with just the twins (the Big Guy was at school) and the boys happened to spot the aisle with dog food as I drove the cart by. We have NOT talked about the puppy while the boys are awake. Out of nowhere they point to the dog food and start asking when we can get a puppy.

What does Mommy say? I asked.

We know. When we get a new house. They even answered together (because of course).

From there they went on and on about how they were going to get a puppy - a boy puppy - so there will be FIVE BOYS in Mommy's house and no other girls. And then? They started in on names. All without a word from me. I was pushing the cart and wondering where this all came from.

And then they came up with it. The perfect name for their puppy.

Butterscotch would be his first name, Beef jerky his middle name. Obviously.

Insistent too. They laughed over dinner while telling Daddy and the Big Guy their story. The Big Guy decided he loved the name too. You know, for the puppy they don't even know that they are getting.

I have a few weeks left to do some damage control. Throw your names at me!