16 days without blogging. Might be some kind of record for me... although I suspect I may have gone that long with all the Boston stuff I could not blog about. I hate having so much to say and not being able to say it in this space. Especially when I want to shout parts of it from the rooftops.

The Doodle Bop is shouting it from the rooftops if you see him. I will just tell you that the twins got recognized for the first time this morning and while I wasn't sure how I felt about it, they were ecstatic and grinning from ear to ear. After that? Every stop we made ended with the Doodle Bop telling a random cashier his news. And every single one ignored him. My poor guy.

Part of me gets it. When a five year old is telling you something sort of unbelievable of course you don't believe it. But it would be nice if you gave the littlest smile, nod, or even an oh really?

The last few weeks have been crazy as usual, and crazy different at the same time. The Doodle Bop and I got rear ended by a car full of teenage boys on our way to the market a week and a half ago. We were just one block away, stopped at a stop light for a good minute ... and bang. I could not even comprehend what had happened because I had not been in the act of stopping. We had been stopped. What the heck happened?!

I was so thankful to be in a truck. LOVE my Ford Explorer. While we are still waiting to see what is wrong with ours, it appears we may only need a new bumper. The other car? The entire front was smashed up. The teary eyed kid admitted to me he took his eyes off the road for a few seconds and he was so sorry - and then tried to tell me we didn't need the police because only his car was damaged. Um...no. I explained that I had a 5 year old in the car and we were calling the police. The Doodle Bop ended up being taken to Hasbo by ambulance as a precaution and it was horrible to see him on a backboard in tears.

He ended up being 100% OK. That news alone left me teary. I was beyond thankful. I hurt my neck and shoulder but all I cared about was that my baby was OK.

This week I need to repeatedly remind myself of what is most important - that he was OK and everything else can be fixed. Because I am oh so aggravated right now. When I say everything that could go wrong with this insurance claim since then has gone wrong? It has. From the kid not reporting it, from an adjuster who acts like he is doing me a favor, to fighting with rental car companies. I spent so many years working at an insurance company handling these things for clients myself that I thought this would be so easy to take care of now. I couldn't be more aggravated. And if you follow me on Facebook you really saw me lose it over the last few days with the rental car situation.

Changing rental car companies on the advice of a friend yesterday afternoon was the best thing we could have done (till the adjuster gets wind of it I'm sure - but the amazing girl at the company vowed to fight for us). We went from a small SUV that did not fit 3 booster seats in it (which was Not OK) to a newer Ford Explorer with 7 seats that the boys are beyond in love with. And I can start to breathe again. (I think.) 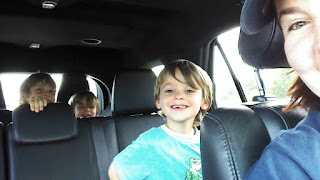 Trying to get back into the daily routine of blogging again. More posts this week to come, I promise. The boys got word they are finally allowed to cut their hair so you KNOW that will make the blog. I'm so sad! I hated the in between stages when it was everywhere, but I am loving the way it looks now. Just as they are ready to pretty much shave their heads. We will see what they end up with - but I can assure you there will be before and after pictures.

See you all tomorrow. There WILL be a Thankful Thursday post. I promise.