I was just telling one of my friends last week at the beach that as much as I think I once tried to fight the title, I am clearly a Mom of Boys. All boys. That's me. Not that I don't love my guys more than anything ... but once I saw myself with girls too.

Now? After being a seasoned all boy mom? This is how we roll.

These are the 'pretty mantis' ... as the boys call them. No matter how many times I have said Praying Mantis. It has been 'pretty' since they were small. We ordered two egg sacs a few weeks ago from Insect Lore. Last night one of the eggs started hatching.

Did I mention each sac should hatch between 75 to 200 of these tiny guys? 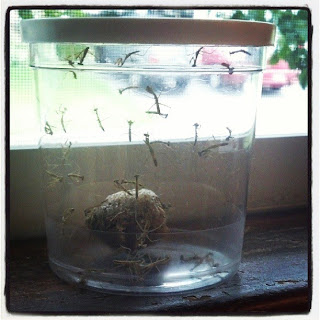 A mere hours later, the boys were horrified to find they had started eating each other after they woke up this morning. I warned them it would happen, that we would have to release them ... but I didn't think it would happen in just hours ... before they all finished hatching. 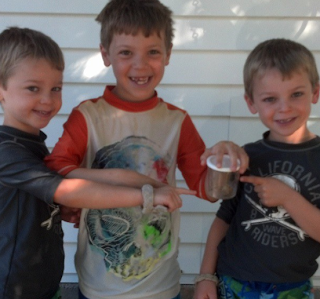 The boys said goodbye before we hit the beach today and we released them into our front bushes. 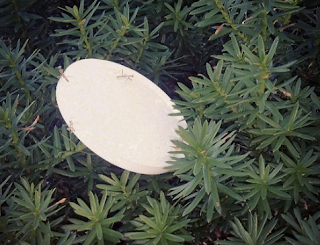 I am so proud of this photo below. I didn't even realize what I had captured until I went to Instagram it. Look closely. They are walking around the top of the container and hopping out! 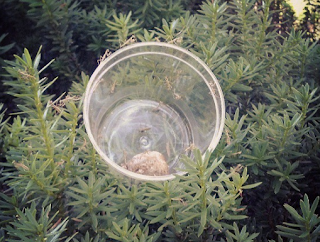 And of course we have a video...

After the great pretty mantis release, Al went to work and the boys and I hit the beach (for the third time in six days). The waves were so rough this morning that we walked the beach for awhile because I didn't want the kids in the water until it was calmer. The Bunny Bee ran down half the beach clearing out all the seagulls and laughing.

Once we finally picked up the camera I left behind - as we went to walk the other half of the beach - the Bunny Bee decided he was over chasing the birds but the Big Guy and the Doodlebop jumped right in. 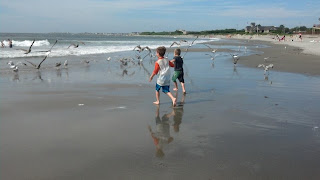 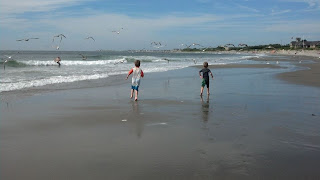 Today we had a turn around. Before the boys pulled out their boogie boards, the Big Guy started finding Atlantic Sand Crabs (which now have a name thanks to Liz and her research) on his own. Huge. Since the boys have been small they have me find them and put them in buckets. I'm the girl always digging up the beach on her hands and knees, to fill buckets with sand crabs. But this time the Bunny Bee jumped in with a bucket and the Doodle Bop actually held some for the first time ever. 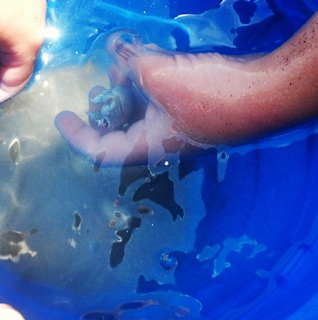 Except for this one that is. The Big Guy wanted to know what all this 'orange stuff' was. 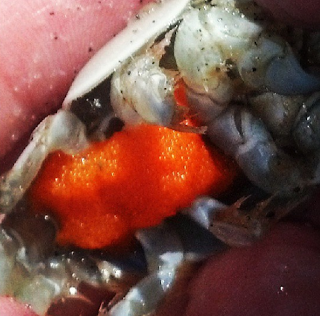 Babies my friend. Eggs that will be babies.
Shrieks and a round of Ewwwww!s from everyone.
That's right. I'm not afraid. Mom of Boys here. I wear that badge proudly.﻿
Posted by Liza at 9:03 PM