The Adventures of Halloween Weekend

Taking a short break from the 30 Days of Truth I've been working on. The weekend was so busy I was not able to blog. What did I do you ask?

Where do I begin.

Friday night my mother and father in law babysat the boys so my husband and I could run out and get Halloween costumes for the following night. We planned on Zack Morris & Kelly Kapowski from Saved by the Bell to rock the late 80's early 90's. High school sweethearts to boot? Time out! Genius! Couldn't get the Bayside shirts in time, and with my husband's work schedule we were off and running the night before. Sheer craziness at the stores. The first store was packed - like sardines - we couldn't even get down the aisles. Found our costumes at the second stop, but there was not much of a selection. How not much you ask? I ended up with Gretchen the German bar maid and he ended up with Charlie Brown. Yup, you heard that right. Hey look, Charlie Brown finally gets a girl.

Saturday morning my husband worked. My mom and her friend helped out by taking the Big Guy to soccer - where he scored a Goal! While I took the Bunny Bee and the Doodle Bop to hockey with my dad. After that was a kids Halloween party we took the boys to, then home to get ready for my sister's Bachlor/Bachlorette Halloween party. (Three weeks to the wedding!)

My mom arrived to watch the boys and we were out the door. This? Is the bachlorette. My sister. 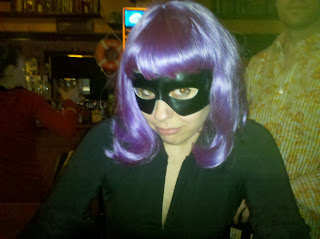 We got to the bar and were shocked to find, Another Charlie Brown! What were the odds?! Sadly, I have not one photo of my husband and I from the night.

He's been battling bronchitis for the last month now and each time it just about goes away it comes.right.back. Lung problems? Freak me out. Scares the hell out of me to see him not able to breathe. He started getting worse and we left after about 2 hours. That night, I don't think either one of us got much sleep.

In the morning I took the boys out so he could get some quiet and took them shopping. When we came back I got him to agree to get looked at (which is no small feat) so we dropped the boys with my dad (what luck everyone was home when I needed them this weekend, it rarely happens these days!) and to the treatment center we went.

I had this moment where I thought for sure he was going to get in an ambulance and transferred to the hospital. We walked from the parking lot and he couldn't even speak, I got him signed in. They saw us right away. Asthmatic Bronchitis is what they are calling this, even though he never had asthma prior to this. Or Bronchitis. Ever. Me? I get bronchitis each year, without fail... but not him. He's the healthy one.

A few hours, shot in the bum, breathing treatment and new perscriptions later, we were walking back to the truck. Where my husband notices a tire is losing air. Not just any tire - THE tire from my mini photos essay the other day - that was JUST fixed! Another nail, sticking in the same freaking tire. Got some air, picked up the kids, called AAA. Who this time, did not come so fast.

By the time I had to take the boys to hockey practice AAA was still missing in action, so my sister in law came and picked us up. We have 2 cars, but the kids only fit in the truck. After hockey, I noticed a text from my husband that AAA couldn't fix the tire and he was out trying to get it taken care of. That's right, a few hours after he left the treatment center he's out again. So much for taking it easy.

The truck didn't come back home till after dinner, and by that time we were running behind. Halloween night and we had stops to make. Had to cancel on the boys godmother, felt terrible. Jetted off with my Optimus Prime and 2 War Machines. 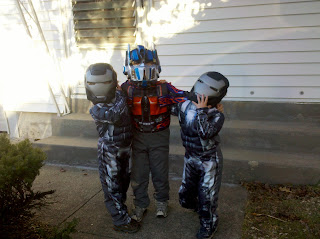 Stopped at my mother and father in law's house, then my parents. We stopped back home to check on my husband and he (against my advice, though I totally would have done the same thing) put on his jacket and joined us for trick or treating. It was getting late so we just did one block with the boys.


There were a few scary houses set up and the Big Guy and the Bunny Bee were too scared to go up to them for the candy. What totally amazed us, was the Doodle Bop's willingness to put a smile on in the name of candy, say 'I'm not scared', take my hand and drag me up those steps.

THIS is the kid who will not go from one room to the next without actually crying for someone to turn a light on for him if he doesn't think it's light enough. And here we are outside, in the dark, with only a glowstick around his neck. And he faced down Michael Myers while his brothers cried at the curb, all in the name of more candy. And? Said to his brothers, 'It wasn't scary, it was FUN!'

Something else that surprised me last night. When I was a kid I was taught to always be aware of the little ones. Let them go first, make sure they don't get hurt. In the one block of trick or treating we did I felt like I was always trying to make sure the boys weren't getting trampled by the loads of older kids actually cutting them off. Shocked me really. The Bunny Bee nearly got his in the eye with a hard plastic sickle I had to deflect with my hand, by a kid who towered over him and pushed right past him.

The boys were unfazed and just happy to be getting all the candy. We called it a night and let the boys bundle up and sit on the steps with my husband while he turned on the porch light, put on some scary music and gave out some candy. I have a feeling they had even more fun doing that. The boys danced up a storm and gave everyone candy. The candy was gone fast with kids coming by the carload. (I HATE that.)

We let them each pick a piece of candy to eat, gave them a shower and made it into bed a little over and hour late. Not so bad for the crazy day we'd had. Hope everyone had a Happy Halloween! (I for one am glad November is here). Bring on the Turkey!
Posted by Liza at 1:14 PM