Just a few hours from now, my very first baby boy will turn 5.

We celebrated his birthday with a party over a week and a half ago.  Knowing that he was not Actually 5 yet is what I think kept me from getting all misty over it.  Now that he just spent his last day as a 4 year old, I have been on the verge of tears all night.  And I can't really explain why.  I'd like to say I'm not a crier, but who am I kidding with that.

We tried for nearly a year to get pregnant after we got married.  It just was not happening.  The month we finally relaxed and decided to just go with the flow?  Though we didn't know it at the time, maybe that was all we needed.  Only later could we trace it back and say that weekend we spent in NH to celebrate our 1st wedding anniversary... we Finally got pregnant.

I will never forget seeing that positive test.  10 months of negative tests and when you actually get that positive?  So exciting.  We didn't want to know what we were having.  We wanted the surprise.  Boy or girl we would be happy with, though we both liked the idea of a boy first ... a protective big brother.  We didn't tell our families until we hit the 3 month mark.  We asked everyone out to dinner and took out the ultrasound photo.

The pregnancy was a tough one.  Five months I threw up.  All the time.  The baby was breech, the baby wasn't breech.  I was so swollen.  Braxton Hicks from 7 months on, Obviously he would be coming early!  Did I mention he was due December 10th?  Yeah, he wasn't having any of that.  Not my kid, he had a mind of his own.  I wasn't supposed to get induced until December 24th but my doctor was understanding enough to do it a little early and gave us the date of December 21st.

The night of the 20th we checked into the hospital for the induction.  By 2am I was in labor.  12 hours, an epidural that had completely worn off and over 2 hours of pushing later?  We had our... Baby Boy!  An 8lb 3oz baby boy. 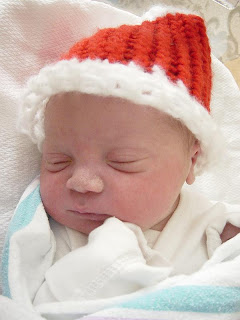 He was so... amazing.  Who ever knew you could instantly fall in love with someone, just like that.  My favorite photo of the two of us from when he was so small? 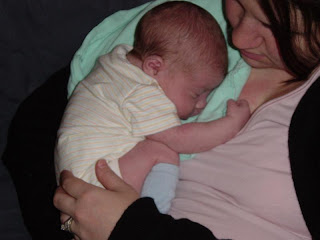 I'd love to say he slept like an angel, but really he cried all the time.  All.the.time.  Five months of testing to discover horrible acid reflux.  But once we got that straightened out?  Wonderful baby!  Who even started to sleep!  Heck, we were suddenly enjoying things so much we said hey let's have another just like him!

And he became a big brother - to twins - at 18 months old.  This photo may or may not show him looking a lot more excited than he was before realizing... wait, these kids are coming home to LIVE with us?! 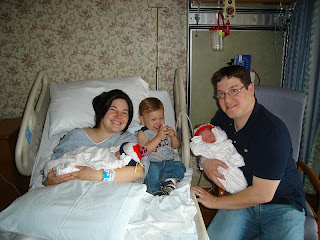 And time has been flying by ever since.  The CP diagnosis.  Doctors, Early Intervention, physical and occupational therapy... but he has Always always remained as determined as ever.  He'll need to work on the swim lessons for awhile, but he kept up amazingly well in soccer.  He's even scored goals!  I don't want him to ever think there is a single thing he cannot do.  Because I know, I KNOW, if he wants to accomplish something?  He WILL.

He has become an incredible, sweet and caring big brother.  He loves going to Pre-K every day and is thoroughly excited to go on to kindergarten in the fall. 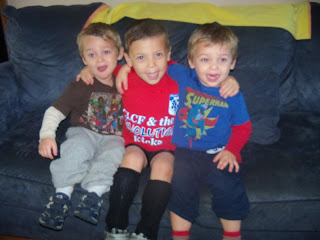 Tonight as I tucked him into bed he was all smiles over the thought of waking up and being five tomorrow.  I?  Was teary.  I told him no matter how big he ever gets, he will always be Mommy's baby - her very first baby.  I gave him a big hug and kiss and it was hard for me to say goodnight to him.

I put together his favors to give out to his class tomorrow, laid out his birthday boy pin and put the finishing touches on his king for the day crown he decorated today to wear in to school tomorrow.  I added his name, a big number 5 and some silver glitter to make it special.  Tonight after my husband gets home we will keep up with the tradition of 'sneaking in' to his room in the dark and putting up happy birthday signs and crepe paper everywhere so he will wake up to the excitement.

And tomorrow night?  We will do what we do every December 21st starting with his 1st birthday - we will go to Lasalette for all the Christmas lights, get some hot chocolate, and cap off the night with a late dinner at Burger King or McDonald's.  I love that he looks forward to this now.

I really can not believe my dear sweet baby boy, is Five.  And I wonder when it is he started looking so grown up. 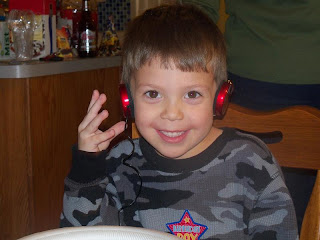