One of the boys Finally caved in to Grama (after some more lying) and admitted he was the culprit behind the baby doll and pillowcase being defaced. 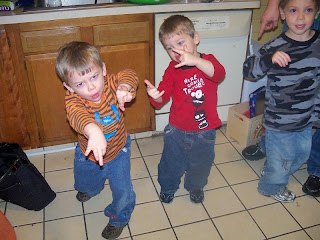 The one on the left.  The Bunny Bee.  AKA Diabolical Genius.

No, seriously.  I think this three year old may just be a genius.

From the time he was ever so small, I would say that I felt as if he was trying to get to the bottom of how everything worked.  I remember him lying on the floor with a small truck, pushing it back and forth for what seemed like forever, intently watching the wheels.  And it was always like that with things.

He was standing, walking, running - and oh my god - talking (always talking) before I was expecting it.  The Big Guy had done most of those things later so when it seemed to come so fast with the twins I was shocked at the big words that came with that speech.  Like when he was in Early Intervention for a different issue and he was being tested on his speech.  Definitely under two and a half.  He was asked what you do when you go to bed.  The answer of course was supposed to be one word.  'Sleep'.

Not the Bunny Bee.  He says 'First, I get comfy'.  When the girl testing him laughed and asked what he just said, he looked at her like she had two heads.  'First, I get comf-ort-able... you know, comfortable?'  We were laughing so hard at how slowly he repeated himself.

It's not much different now.  He and the Doodle Bop have that whole twins who need to be attached at all times thing... but then he also needs to sometimes be attached to the Big Guy.  He wants to be like him so much.  Ask him what he wants to eat or do?  He'll ask what the Big Guy has chosen first.  No matter how many times I say it doesn't matter what he wants, what do YOU want, he will still choose the same as the Big Guy.  He is always trying to emulate his big brother.

He wants the same books read a hundred times.  I catch him trying to read to himself.  He memorizes each and every song the Big Guy learns in school.  And on the radio.  He makes up his Own songs and dances.  And when he Finally admitted he was the one who took the marker to the baby doll and the pillowcase?  I asked him why.  He looked at me and said quietly 'I just wanted to write letters'.

I see now that I have to challenge this guy more.  A lot more.  The question is when.  It's terrible to say that I am always in the middle of something.  I can never seem to get the all laundry done, the house clean... the work I have to do that day.  Or I'm taking someone somewhere - or breaking up the boys fights.  I do not spend the time with him, with any of them, one on one like I would like to.

Some kids are content to sit in front of the TV all day.  I have days sometimes where I can barely get the Doodle Bop off the couch to do something unless I shut off the TV first.  (He is however soaking everything in while he does his couch potato thing.  He can tell you just about anything from his dinosaur show.)  The Bunny Bee though, his new thing is to tell me he's 'bored'.  Not to mention I often find him alone in his room playing by himself.

As I type this, the Big Guy and the Bunny Bee are playing cars and the Big Guy just pulled some Little People out from the bin who have been... marked up shall we say.  I know it could only be the Bunny Bee, because he's the only one who plays with that set.  He sets everyone up and just plays and plays.

So, next on my list is finding ways to challenge my little genius.  And have him use his powers for good instead of evil.
Posted by Liza at 5:47 PM