I'm BACK!  After almost 2 weeks of being sick, getting better, tending to the Bunny Bee who is now sick... I can FINALLY write about how much fun Styleweek was!  Haven't been able to get myself in front of the eight ball this past week but now I can say with confidence I am getting there.

My sister in law and I attended the final night of Styleweek on Saturday, January 22.  The days that lead up to it were a mad dash on our parts to find the perfect outfits to wear.  Several stores (as well as 2 entire malls later) we made up our minds about what we would wear.  How cute are we. 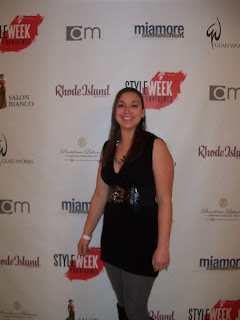 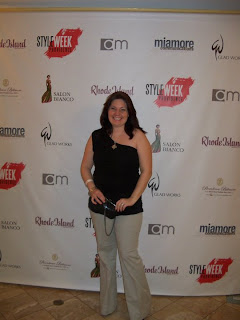 The only bummer is that you can't.see.my.shoes!  So sad really.  Didn't realize till I was leaving the house and out of time that I probably should have had someone (who is not me) hem my pants.  Because I?  Do not sew.  Trust.  See my super hot shoes? 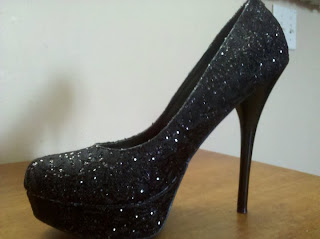 Love.Them.  It's been a long time since I spent more on my shoes then the rest of my outfit, but this time I totally did.  I spent 3 days trying to break those puppies in and you know that saying it hurts to be gorgeous or something like that?

It is so true y'all.

These super hot shoes had me nearly in tears after 2 hours and at each runway show I was That girl who had to kick off her heels to photograph.  I debated over the embarrassment over taking off my heels at a fashion event like this but when I could not take it any more the pain won out.  Surprisingly enough, looking around I realized I was not the only girl doing so which gave me a laugh.

On a side note, anyone care to own these totally super hot sexy shoes?

Worn for a grand total of less than 6 hours and still in perfect condition?  Size 8 and I'll discount you a little!  How can you resist?  (Truth be told I think I got taken in by the sales girl who assured me she buys all her shoes at this store a half size too small because they stretch.  Guess what, I'm a size 8 and a HALF - and take it from me, they.didn't.stretch.)

Back to the night.  In my overexcitedness I forgot that fashion is also fashionably late - of course - and getting us there 45 minutes into the accessory showcase left us really (really) early.  Like handful of people early.  Lesson learned, note taken.  Be fashionably late.

I also thought the accessory showcase would be larger and I didn't want to miss a thing.  While there were several vendors,  we were still left with more than a little time to kill.  My favorite part of the accessory showcase?  SexyPeriod.  These girls are genius!  Talking with them left me wondering how no one had come up with something like this before.  Their very first preview sale started today and I am placing my order.

My sister in law and I then hit the bar and got ourselves some wine.  Which may not have been my brightest idea when we had not eaten and I was on four hour intervals of DayQuil just so I could get myself there, but we needed to ease our nerves a bit.  After we sat I spotted Audrey McClelland from Mom Generations, Getting Gorgeous, Lifetime moms and more.

I so wanted to go over there and talk to her.

But that?  Isn't usually me.  I thought about how my husband gave me a smile before I left for the night and told me to 'network, talk to people, don't be shy'... and to have fun.  And after debating a few minutes I grabbed my sister in law and went on over.  Had it not been for the wine and cold medicine I'm pretty sure I would have been able to hear my heart beating out of my chest.  What would I even say?

I started with the old 'Excuse me, I'm so sorry to interrupt but aren't you Audrey McClelland?'  And she was so incredibly nice!  She smiled, chatted with us a little while, introduced us to her husband.  It was so exciting to meet her and feel like I could actually stand there and talk to her.  She was great and it made me really happy that I had mustered up the courage to go over and meet her.

Prior to the start of the runway shows, Alex Mccord and Simon VanKemp from the Real Housewives of New York hosted the cocktail hour.  When they came down I could not help but notice no one went over to them.  No one except the small entourage of people that came with them.  And Alex was just standing there.  Feeling brave after meeting Audrey, I threw my camera at my sister in law, grabbed her hand and said 'We are meeting Alex'.

What did I open with?  Why, 'Excuse me but aren't you Alex Mccord?'  Followed by my gushing over how much I loved her show and how cute her outfit was.  She looked like a deer in the headlights, which struck me as odd because I figured she must get approached like this all the time.  I asked who she was wearing and she said it was one of the designers from the night before - and then yelled to someone 'Who am I wearing again?'  I can't remember if I got the answer or not.  I did however, get a picture. 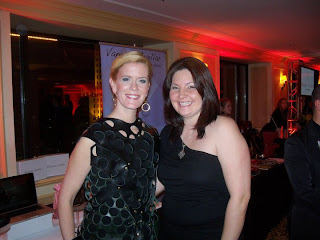 After our meeting it struck me I had the perfect opportunity to ask her some questions - like did she have any fashion advice for the readers on Buy-Her ... and I didn't say a thing about it.  It didn't cross my mind at the time.  Why did I not conduct an on the spot mini interview when I had the chance?!  I don't think it was being starstruck, I think it was more the wine (of which I only had one glass) and cold meds combo on an empty stomach leaving me not as on the ball as I could - should - have been.

Confession time.  Can I tell you something?  I don't even really like Alex.  I know, I just said that.  Jill and Bethenny?  Loved them.  Their breakup left me teary eyed each episode as I could so relate to what they were going through.  Never really a fan of Alex and something that night (as nice as she was to me) confirmed that the way I felt was not so off base.

After the photo I thanked her and off my sister in law and I went.  Looking back there were suddenly several people around Alex and I was so glad I had headed on over when I did.  We looked around a little more and then tried to line up for the runway shows.  We could see the entrance from where we were so we were positive we would get a seat... but no suck luck.  All 3 times.  Note to self to throw some elbows next time.

It was still really cool to be there, we were just bummed we could not see anyone's feet to see what shoes went with each outfit.  First up was the Joseph Aaron Segal Runway Show.  Interesting.  All the models had the very same hair style.  So much fun to look at but something about the music playing left me feeling like I would see it again in my NyQuil filled nightmares. 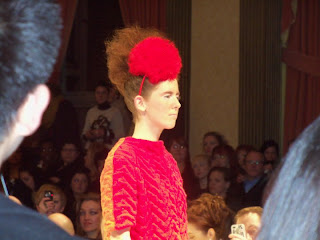 Next up was the Daniela Corte "Gris" Runway Show.  Amazing.  While not all of it was for me, there were several pieces I would definitely love to own and wear. 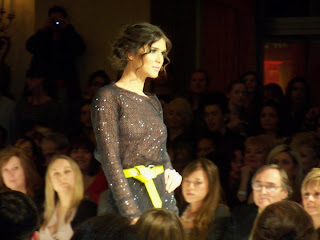 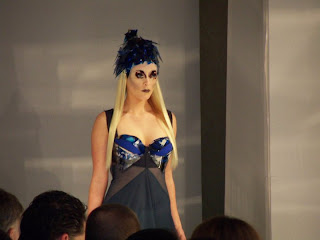 Like nothing I have ever seen.  And we were there in the room watching in person.

After the shows were over we decided to forgo the after party and go home.  It had been a long, exciting night but I was not feeling up to it anymore.  We hopped in an empty elevator that was cramped within seconds and rode down the 17 floors to the valet.  Not even thinking we ran right outside, in zero degree weather (without jackets did I mention?) to get our car ... only to get chuckled at and told to get back inside by the valet guys.  Yeah, we did that.

I was, and still am, so greatful to my girlfriend Liz for getting us to the final night of Styleweek and am really looking forward to June's shows.  Amazing that here, in Providence, Rhode Island where you just might feel like not much goes on - that all this happened. Great experience, I can not say enough. (And you know, now that I've had my introduction I am drooling just thinking about Mercedes Benz, New York and Paris fashion weeks. Anyone want to send me?)

And that's my Styleweek wrap up.  Till June!

Now I'm back to focusing on the boys as usual, getting the Bunny Bee healthy and writing more.  I actually applied for a job as a writer for Examiner.com as either writing about parenting multiples or on a totally unrelated note, beauty products.  Two avenues where we know I know my stuff.  We'll see how it goes.
Posted by Liza at 7:51 PM