On 5 years without my Grampa

For the last week I've really been feeling ... the weight of this day.

My Grampa passed away February 3, 2006.  Cancer that he'd battled on and off for years.

If you're close to me you know he was maybe not supposed to make it to my wedding.  But when I called with the news of the engagement he said I'd made his year.  And a whole year later he danced with me on my wedding day.  That was March 27, 2004.

After the wedding he was sick again.  When I finally got pregnant and called with the news, he again said I'd made his year.  I still don't know how he did it but he held on the whole entire 9 months plus some.  As frail as he was, he made the trip from Florida with my Grama to meet his very 1st great grandson - the Big Guy - who was only a few weeks old.

I remember thinking how good he looked while he was here.  Sure he was sleeping a lot but maybe he would still hang in there just as he had always done.  Looking over the photos after he'd flown back home, I realized I saw what I wanted to see.  Because really he looked very sick. 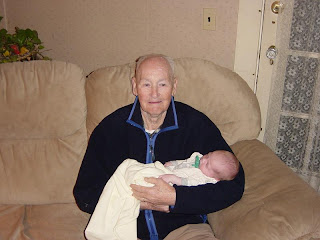 Which he was.  A few weeks later he was gone and even with all the preparation I was devastated.

When he was unconscious in the hospital I debated on whether to call.  Would he even hear me?  When the thought of him passing away made my decision for me, I called and spoke with my Aunt and Grama who then put me on the phone.  I was holding the Big Guy to the phone and told my Grampa he was talking to him, and how very much I loved him.  I don't remember what else I said.  I do remember my head spinning with the realization that I would never speak to him again.  Hardest phone call I think I have ever had to make.  My Grama said he'd moved his face a little while I talked to him and that made me feel so good.

He passed away late that night.

We had a memorial service that summer and it was like losing him all over again.  The start of February has been a little sad for me ever since.  This year though?

That's practically my oldest son's entire life.  Plus there's the Bunny Bee and the Doodle Bop who were born after.  We go to the cemetery sometimes and they all know it's Great Grampa up in Heaven.  They know what he looks like from photos.  The Bunny Bee talked once about how he was up there in Heaven fishing which really struck me.  Because of course he would be.  But my boys will never really know like I know and that makes me sad.


The night before my sister's wedding in November... long after the rehearsal dinner was over and we were all in bed, I fell asleep and had my first dream ever where my Grampa came to me.  He was walking towards me with his arms out.  There was no one else around.  He was quietly telling me something I could not hear.  As I moved closer to see what he was saying, I was startled awake by one of the twins needing help using the potty.

I remember feeling so angry.  The 1st time in years I have seen him and why can't I hear him?  What was he telling me?  I don't think I really slept the rest of the night as hard as I tried.  In the morning before I left for the salon I asked my husband about the dream.  'Oh honey', he said.  'I'm sure it was just because you saw your Grama at the airport yesterday without him'.

But I felt like it was something more.  Only I missed it.

It took a few days before I could even say a word about it to anyone else.  After spending some time with my Grama I told my Mom on the ride home, about how angry I was I missed his message.  And I cried my eyes out.  She had a much different take - it was him telling me everything was OK and he was there for my sister's wedding.  And then she told me that same night she and my Dad had taken my Grama back to her hotel.  Her immaculately clean hotel.  As the elevator doors opened up there was just one lone can of Budweiser sitting on the table by the elevator.  Unattended, nothing else there.  That was what he always drank.  He always had that can of Bud.  Coincidence?  My Grampa?  I don't know that answer.  Does make me think though.

For now, I will try to remember everything good.  Sparklers on the 4th of July, family celebrations, the beach, sleeping over his house before the move to Florida, our trips to Florida, thinking of him fishing, all the Christmases they came back here ...Christmas night in their hotel was definitely one of my favorites... so many memories.

This is the one I prefer best. 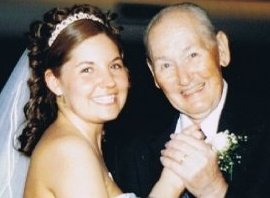 Love and miss you Grampa.
Posted by Liza at 8:31 AM