I have lots to fill you all in on, I know.  Like my new cutie pie who isn't quite mine, but gets to be one of my honorary babies... and my trip ... and video games (yeah, I said that)... and where else you will see me writing in the future.  Before I get into all that though, I am going to devote this post to Megabus.

What's a Megabus?  This is a Megabus (photo courtesy of their website). 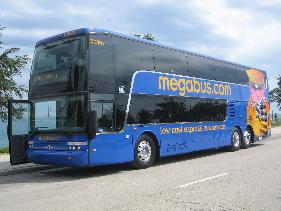 In researching the easiest and most affordable way I could get to NYC (or in having my friends tell me after I put the question out on Facebook and Twitter rather), Megabus seemed like the clear winner.  Super cheap fares.  I'm talking at one point I was going round trip for just $5.  Five dollars!  I didn't book it at that point though, and by the time I finally did so it was still only $30 round trip for two of us.  Amazing!

Now the pickup was literally on a street corner in Providence, no sign in sight - before the sun came up.  The bus?  It wasn't an actual blue Megabus but it was a nice looking red Dattco.  Aside from the seats being a little cramped, it was actually kind of nice.  Clean even.  Outlets in every other row.  Bathroom.  Aside from the sort of sketchy looking guy in front of me, everyone else seemed normal enough.  The bus driver was really nice and got us there within 10 minutes of our projected arrival time.  When we got there, I could not say enough nice things about Megabus!

Was I going to travel with them again?  Absolutely!

Going home after an exhausting day however, was a totally different story.

Unlike Providence, the NYC Megabus stop is clearly marked and there are lines that form according to your destination.  That made me more comfortable to know I was in the right spot.  When the double decker blue Megabus arrived, we boarded and sat on the top deck.  As we pulled away people were complaining the WiFi was not working, but I did not have a problem with my phone.

We hit traffic right from the start and things got really bumpy in a construction zone.  The driver pulled over briefly once with no announcement, and then shortly after that we were pulling over again.  He announced something about being down a tank and having no air suspension.  He said the bus was "leaning severely to the right" and it was no longer safe.  We were stuck in a breakdown lane in NYC and I was trying not to panic.

After a few minutes, the driver said we were just going to try (try?!) to make it to the Connecticut border where there would be a new bus waiting for us.  We were driving and I was starting to relax (slightly) and then comes the announcement that he needs everyone sitting on the right side of the bus to get up and move to the left side.  I think my heart stopped.  Top level on the double decker and we might be tipping over?  Everyone got up and moved and all you heard was 'click, click, click' as everyone strapped on their lap belts (like that was helping us).

And complaining out of being panicked.  I know I probably sound over dramatic now, but I had visions of tipping over and all I wanted to do was get off that bus.

When I had originally told my mom I was taking a Megabus she asked what it was and then referred to the fact that it had to be better than a Fung Wah bus.  I look out the window and what passes us at the speed of light in the next lane?  A freaking Fung Wah bus.  Actually made me laugh.


We made it to CT, switched to another Dattco bus (without outlets) and we were off with a new driver.  This guy was good, we were only about 25 minutes later after all that!  Getting off the bus last night I was so ready to rip on Megabus and get my friends on the bandwagon to boycott.  Banned!  I also kept thinking that well, you get what you pay for I guess.

Today though?  After some sleep and a day removed from freaking out, I don't know anymore.  The ride there was great, it really was.  Torn over whether or not I should give the Megabus experience another chance.  Was this just a fluke?  Or do you really ... get what you pay for.  What do you say about my future NYC travels.  Give Megabus another try or find a new company.


(Megabus mega bus courtesy of my friend Julie who came up with that last night! Luv ya Julie!)
Posted by Liza at 6:33 PM