Too tired to even come up with a title

Ever have one of those days you wish you just could have stayed in bed with the covers pulled up to your neck?  I would have loved that for today.  Last night we watched the Superbowl, then I stayed up for Glee and the news... and after all that I could.not.sleep.

Shut off the TV but sleep eluded me - until sometime after 4am.  And the boys are up by 6:30am.

Big Guy wasn't feeling well.  Felt warm but no temperature, just a lot of congestion.  Home from pre-K he stayed.  The boys all ran an errand with me and then we were in for the day so the Big Guy could not only feel better, but also so they could spend their last few hours with Mr. Guinea Pig.

I had arranged for Mr. Guinea Pig to move to his new home during nap time, so they could say goodbye to him beforehand and not have to actually see him leave the house with someone else.  The twins cried a little on and off but the Big Guy?  Cried nearly all morning.  Killed me.

Naturally at nap time all hell broke loose.  No one slept as tired as I could tell they were.  When Mr. Guinea Pig's new family came for him I thought the Big Guy was finally asleep.  As I gave them instructions and helped carry him to their car I could hear him hysterically screaming from his room 'Nooooo Mr. Guinea Pig! Don't GOOOOO!  Come back Mr. Guinea Pig!!!'  Made my heart hurt.  Did I mention he cried like that for almost 2 hours?  Even with all the preparation and talking we had done about this, he is only 5 and he was inconsolable.

I opened the twins door to check on them and the Bunny Bee flipped off the light and tried slamming the door closed on me to buy him some extra time to run to his bed.  Both of the boys just looked at me.  I could tell by that particular look something was definitely up. 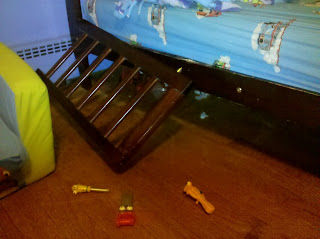 He's got to be the only 3 year old there is who can take the plastic tools of a Disney toy and disassemble his bed rail.  And since he's only 3 and using plastic tools combined with his brute force... 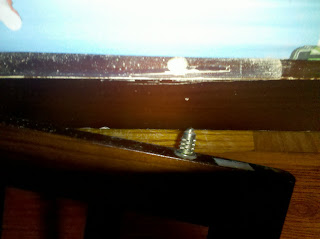 This photo does not do the scene justice at all, but you are looking at splintered and broken wood.  As in a bed that now can't be fixed.  How the heck does he do this?!  The Bunny Bee smiled at me sweetly and chimed in 'It's OK Mommy, I told Doodle Bop he can sleep with me in my bed from now on.'  (Like that's an option.)

I'd like to say the day finally got better after that.  Instead, I ended up with a migraine, a teary eyed 5 year old missing his pet, and two 3 year olds running rampant after they lost their TV viewing privileges.  Sitting down for a nice family dinner before my husband had to go back out to work, the Doodle Bop refused to eat.  Chicken and rice.  What is so out there about chicken and rice I ask.

That child was content to sit at the table by himself for an hour and 20 minutes.  I repeatedly told him to get up and put his plate in the sink and he would yell back 'Nooooo Mommy, I AM EATING!'  Spoiler alert, he wasn't eating.  When I finally took his food away and sent him to play in his room he screamed and cried for the last hour till bedtime.  Needless to say my migraine did not go away.

Now that the boys are all finally asleep for the night I have a million things to do.  This one day has seemed like three days though so I am just going to lie on the couch till my husband gets home.  By myself.  With the TV on low.  In the dark.  (Maybe after I eat half of a giant mozzarella ball.  Who knows.)

Fingers crossed for a better day tomorrow.  I think I've gotten a head start on the Doodle Bop at least.  I have hidden Mr. Handy Manny's tools.
Posted by Liza at 7:36 PM