On injuries, my anniversary and other things

March 27th will be my 7th wedding anniversary.

Since the twins were born, my husband and I go away for a weekend each year somewhere around our anniversary.  It's the one thing we really do just for us and my in laws have always been so sweet to watch the boys.  The last 2 years we have gone to Boston.  With the boys so small we never felt like we should go too far away.

As much as I love Boston, this year I wanted to do something different.  Problem is we spent so much time trying to come up with different things we never did book anywhere.  The night before we were leaving we were still scrambling to pick something and were having a problem finding hotels.  Instead of booking just anywhere for the weekend at the last moment we thought we'd do something different this time - a nice dinner and night out Friday night, then NYC Saturday.  Bus in the am, spend the day, bus back home.  Get the boys Sunday.

Friday just before dinner we said goodbye to the boys and went out to dinner.  I was dressed in my super sexy super high black sparkley heels (yeah, the ones that don't exactly fit right) with jeans and a cute top.  After dinner we went to Federal Hill for dessert at Pastiche.  So good.  We were talking about what else to do as we left.  My husband was in front of me and as I was going down what I think was the last step, I felt my heel catch.

My knees went one way, I went the other... and what came next was the slowest most awkward fall maybe ever to be seen by tons of people on the hill.  (By a totally sober person no less!)  I tried to stop myself and in the process I hit my knees, ankles and then my right hand and scraped them all across the pavement in full view of everyone sitting at Pastiche and standing outside as well.  I was so horribly embarrassed I didn't even notice the pain.  My husband helped me up and took me to the car, where I was devastated upon noticing I ruined the front of my left heel.  The freaking most expensive heels I ever purchased.  Ruined.  An unsparkley dull and scraped part.

Then?  Ouch.  Next stop?  Emergency room.  Because of course.

By the time we got home I had had my hand x-rayed three times and got put into a splint I have to keep on 24/7.  No breaks thank god, just pulled some things and whatnot.  Took off my heels to find scraped up ankles.  We pretty much went right to bed at that point because we were getting up for NYC at 5am.  My husband said we could cancel but we'd already purchased the tickets and there was no way I felt like staying home. 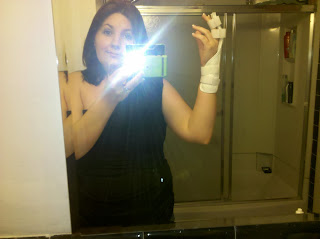 Saturday morning I was so hurt and stiff, but I said I was fine.  We made the bus on time.  Peter Pan this time instead of Mega Bus.  I thought our driver was a comedian.  He commented we would stop in Mystic, CT, that we might not recognize the route because he would go through NJ and the Lincoln Tunnel and that he hasn't been on time all week so we could expect to be 40 minutes late.  I laughed my ass off, seriously thought he was being funny.  Nope, he meant every word.  Stop in Mystic where we picked up no one but he used the bathroom.  Spent more time on a tour of NJ, went through the Lincoln Tunnel (must have missed the sea of swirly twirly gum drops) and we were 40 MINUTES LATE!

But we were there.

And we had a really good time just the 2 of us.  5th Avenue, Trump Tower, NBC Studios (tried to get a tour but they were sold out), Times Square, Bubba Gump Shrimp for lunch and more.  We walked everywhere.  Took the 6pm bus back and we made it back home just before 11.

Called the boys after we got up this morning only for all of them to tell us they were going to live at Nonno and Lita's house now.  Hadn't they missed us?  The Bunny Bee did, but not the Big Guy or the Doodle Bop - they were set to stay.  Being back home with everyone later felt so good.

This was the craziest, most eventful, not at all relaxing weekend away with my husband ever.  And from how much it is hurting to type this post I will say it's going to be another 2-3 days before the splint comes off and I am back to typing, blogging, Facebooking and tweeting.  And still, I wouldn't trade the time alone with my husband for anything.

Next year?  We are going away somewhere boring.  And doing nothing.  After this year?  I need the relaxation.
Posted by Liza at 8:29 PM