Anything you can do I can do better

You know that song "Anything you can do I can do better"?  Been running through my head since yesterday.  My boys don't even know it, but sometimes it's like they could have written it - the twins especially.  They are in constant competition with each other.  I have always said best friends and worst enemies they are.  Since birth.  They have the power to reduce each other to tears faster than anyone else can with a simple look or a 'I'm not talking to you anymore'.

While I will admit to helping a little of the competition along with a hey who can get dressed fastest to get some butts in gear from time to time, that's about as as far as I've gone.  A few weeks ago on the suggestion of another mom after posting the problems I'd been having with the Doodle Bop we had an Autism screening at the pediatrician.  I pretty much knew in my heart that was not what it was but I guess I needed to hear it, and rule anything else out.  Which we did thankfully.

It turns out that while both my guys are smart cookies, the Bunny Bee is really starting to pull ahead and do much more than age appropriate (like teaching himself to write).  The Doodle Bop is feeling left behind and needs some extra reassurances.  While the Bunny Bee draws these pictures of people and the outdoors the Doodle Bop scribbles.

They were both on the floor coloring and the Doodle Bop got up beaming and showed me this. 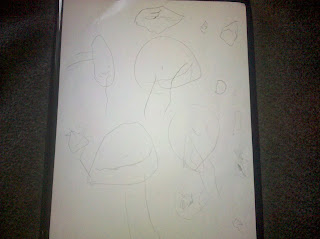 People!  He drew people!!! Best.picture.ever.  I swear I am thinking of framing that puppy.  I held it up and said to the Bunny Bee 'Look what Doodle Bop drew!'  Expecting him to cheer his brother on as they so often do.

'Eh' he said not even looking up from his paper.  'Hey Mommy watch me write my name!'

And then he hands me this. 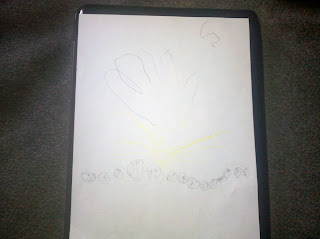 Hard to see I know,  but it's lots of small people (all of which he named) under a bright yellow sun with a tracing of his hand and the letter S on the top of the paper - and his name written on the back of it.

At least they don't hold grudges for too long...

Overnight, the Bunny Bee got up and sent us all into a panic with an ear piercing scream as he puked all over the floor outside the bathroom.  (He's been fine ever since so I don't know what that was about.)  But it was the Doodle Bop who amazed me.  The Big Guy came out of his room to say 'Ew' and then literally go right back to bed.  Not the Doodle Bop.  He waited up in their room for him to come back so he could give him a hug, stroke his hair and lend him a stuffed animal to make him feel better.

This morning everything seems back to normal between them.  One minute they are fighting and yelling, the next they are on the couch cuddling.  I don't know about those two.
Posted by Liza at 10:39 AM