'Chaos as usual' has been the way I have described life since having 3 babies in 18 months.  It's almost become my motto.

Yes there is chaos.  There is always chaos.

And we just go on (though I might bitch about it along the way).

Might?  Who am I kidding.  I WILL bitch about it along the way.  But I can also find the humor in it most days as well.  This past week has been chaos as usual ...to the max.  The Big Guy's school vacation and I tried to pack it in with as many fun things as possible.  Trip to Westerly, beach, trips to the Y to play with Julie's girls, the movies to see Hop, a visit to the Easter Bunny at the mall with a carousel ride, out to lunch, Daddy even took a day so we could have a family day.

The night before that family day?  Husband at work.  Boys ready to go to my parents to decorate eggs.  I'm getting ready to go when I hear this noise that makes me panic.  The sound of gasping for breath and trying to scream but not much is coming out.  The Big Guy (who is still sporting his liquid stitches and is about to be renamed Injury Man) is standing there, bloody mouth and out comes the scream and the tears.  The Doodle Bop accidentally bonked his head into the front of the Big Guy's mouth trying to sit by him.

Long story short, the next morning I called our family dentist only to find they were closed for an extended Easter weekend.  Called my sister in law for her opinion (she's a dental assistant) and she got us in where she works.  We went down to her office where they were all so nice enough to take care of the Big Guy - who required bonding on like 3 of his teeth to keep them all together in that little mouth of his.  Thank God he was able to keep those teeth.  And how cool is Auntie?! 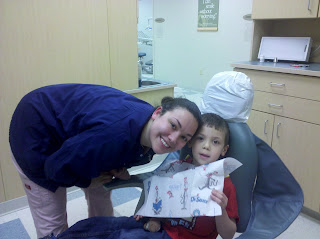 Easter was a blast.  Indoor egg hunt in the am (too wet outside that early), boys tore through their baskets, 2 Easter dinners.  One at Oma & Opa's, another at Nonno & Lita's (complete with 2 more egg hunts - outdoor this time).  The boys had so much fun playing with all the cousins, I love watching them all on holidays.  They are already asking how long till they get to see them again.

Jules was sick this week so I braved the Y myself (OK OK it was only once - tough to be motivated by myself!)... and today everything just hit the freaking fan.  Last week while I was in Westerly one of the stops I made was to the consignment shops to close out my accounts.  Only For A Season had a handwritten sign on the door they were now closed that particular day of the week and that they no longer accepted credit cards.  Didn't give me a good feeling but the place was still stocked with items so no worries.  I had requested they mail me a check in December from all the boys things I had consigned and they said it would be sent out in January - and nothing.  I would just give them another call.

I went a few store fronts over to Again & Again Consignment LLC.  Women's, more high end ... months ago I had consigned a Coach bag along with several pairs of pants, jeans and a few tops.  They made me sign a form, pay from a credit/debit just to consign with them of $7 and told me my account would be charged yearly.  I asked for a printout of what I was dropping off to them and they said they didn't do that.  Should have turned around and left then.

The second time I had stopped in my Coach bag was hanging on the wall with the others and they informed me nothing had been sold yet.  So there I was again last week since I was in town and told them I wanted my account cleared out.  They handed me $3.  THREE dollars.  I asked what was sold that I got $3 for and they acted all put out as they looked it up and said a snowman measuring cup.

Um, I KNOW I have never owned (much less consigned) a snowman measuring cup.  And then the woman says everything else was donated.  Um, you donated a coach bag?  Riiight.

I explained they must have had the wrong account.  Nope, this is you - snowman measuring cup, 1 pair of jeans, 1 pair of pants - and confirmed my address and phone number.  I was suddenly livid as I tried calmly explaining that was NOT me.  I didn't care what their info. said, that was not me and where were my things?  I stood there for over 20 minutes while one woman 'searched' a computer and another looked over the whole store at the handbags asking if one was my Coach bag.  No, no and no.  In the end they told me they would have to research this and would call me.

Here we are NINE days later and no call.  Called them this morning.  The lady totally knew who I was, you could hear it in her voice - and then she denied being there that day, said she didn't know anything about it and she would leave a message for the owner to call me.  Who 'won't be in until Sunday at least'.  Mmm hmm.  You know they aren't calling me back anytime soon.

I don't know what it is about my luck (or lack thereof) with consignment stores.  The first one I went to was brand new in Cranston and I had spoken with the woman a few times before I dropped off boxes of things to her.  She didn't even last one season.  One day I get an e-mail saying I have like 3 days to get my things, she is closing the store.  Good lord.  Horrible experience.

Before trying to consign a second time, I checked out Only For A Season in Westerly - tons of kids things.  Spoke with them in person, met the owner who assured me they had been there awhile and would stay there and I would not have an experience like the 1st one again.  That 'everyone in town' buys from them.  I liked them so much I bought the boys Lego table there and told them I would be back.

A few months later after speaking with them again I consigned a TON of things - Halloween costumes, all the boys Christmas outfits (I so regret that) ... clothes galore.  Last I checked in it had not all sold but some had and they would mail me a check - which didn't come.  So I try calling them this morning and the freaking phone has been disconnected.  I google the heck out of them, the same number everywhere.  I swear they had a facebook page that I 'liked' - now it doesn't seem to exist.  Even called 411 (been YEARS since I have done that) and they had no listing.

Chaos as usual I was saying.  This afternoon the mail comes and I receive bills for the twins botched blood draw last month - as well as the redraw the next day when the lab called me back in... times 2 of course.  Yeah.  Cause I'm gonna pay $200 for their errors.  All I could think was who the hell thought they should be charging us twice (per kid) for that.  Seriously?

The Bunny Bee was breaking down in tears all day.  I thought he seemed warm, but he and the Big Guy actually told me he was fine - it was just warm and they were running around.  After dinner I look outside at the boys playing in the yard to find the Bunny Bee sitting at the picnic table - with a sweater on (it was 70 degrees) and crying.  Picked him up and he was hotter than hot.  Instant temp of 102.

And tomorrow night the Big Guy is due to start spring soccer.

And oh.  Guess who's getting added to the Banned list.
Posted by Liza at 8:03 PM