Because clearly I must be crazy

Saturday was crazy.  No other words for it.  I started a bad habit after the Big Guy was born and I was pregnant with the twins.  I needed to get out.
Daily.

For my sanity.  And my attention deficit.

Which also lead to the Big Guy who could barely speak crying and yelling 'nooooooo home!' from his car seat as he sat next to his brothers in the back of the truck.  Any time we got anywhere close to home.  And so began the boys and I always on the go.

This weekend the South County Hot Air Balloon Festival was taking place and Friday I got the bright idea to take the boys.  For 6am when the balloons are inflated.  See, way back when in junior high I worked at the festival and it was so much fun watching the balloons go up in the morning.  I thought the boys just may love it too and that this year they were just old enough.  I didn't tell them the night before.  When the alarm went off at 4:40am I considered going right back to bed, but my husband put on the TV to got me going.  He got up with me even though he didn't have to be in to work for quite some time and could have slept in.  We got everything ready to go and by 5:15am the boys and I were on the road - in the dark - while the sun was trying to come up.  I have to say, they were in amazingly good moods for being woken up at 5am.  We were on the field at URI just before 6am and found a great spot to sit.  The boys and I had such a good time.  They actually asked if we could do it every year. 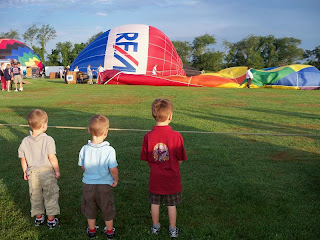 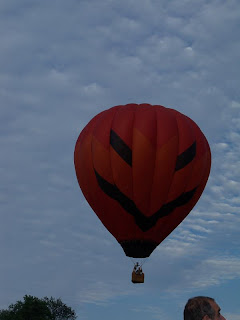 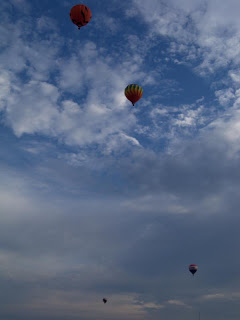 At 8am a man made trout pond was supposed to open but sadly no one came over to run it.  There were other children milling around waiting for it also.  After 20 minutes I was done.  And you know me being me, I had promised the boys I would take them fishing for the 1st time... so off we went to fish.
Which I hadn't done since I was a kid with my dad.
We got in the car and drove to Johnston Memorial Park which years ago was stocked with fish. But spoiler alert, is now only packed with stuff that looks like.... this. 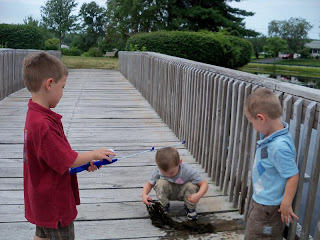 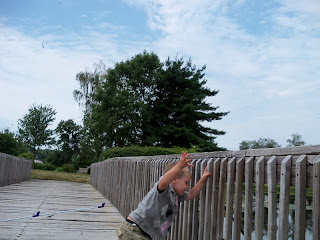 And the Bunny Bee was the only one of the three who would touch the stuff each time it got reeled in.  What a sweetie, he would even throw it back in.  (I know, I almost threw up a little in my mouth there too.)  Epiphany of the day?  I so do not have the patience to try to teach 3 small boys how to fish.
The day didn't end there though.  Because clearly I must be crazy.  After stopping in to see my dad who we hadn't seen in weeks, we also went grocery shopping and then even hit up St. Mary's Feast (which we very nearly tried the night before but it was too hot at over 100 degrees) after my husband came home from work. The boys got to each play one game (holy freaking rip off) and ride one ride. After that they got a snack and we sat and watched the band play. Doodle Bop was fascinated to watch the band. 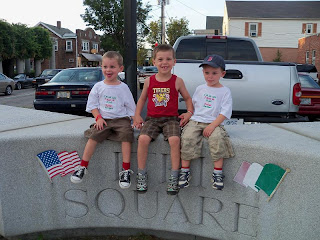 Dizzy yet? I think I am.  We got home a good hour after the boys regular bedtime.  The fell asleep pretty quick, but I was not that far behind them.
﻿
Posted by Liza at 7:37 PM