Have you heard about Sunflowers for Wishes?

Sunflowers happen to be my absolute favorite.  When my husband and I got married I wanted to carry them in a big bouquet down the aisle, but ended up choosing something else since they were sort of out of season in March and all.

Once I heard about Sunflowers for Wishes, I was so there.  Sure we spent years trying to grow them in our side yard only for them to turn and face my neighbors house.  This year was the first year I just plain gave up.  At Buttonwoods Farm in Griswold, CT?  There would be 14 acres of sunflowers!  And with proceeds benefiting the Make A Wish Foundation it made it even better.  We planned the trip for the one day my husband had off from work and explained to the boys it was for a charity that helps kids.

When we pulled up to the farm the first thing we did was purchase a bouquet of sunflowers which the boys fell in love with and took turns holding.  They were given Make A Wish buttons to wear and posed for photos with the flowers.  We purchased hayride tickets (for $5 a person, seriously a deal) and waited in line. 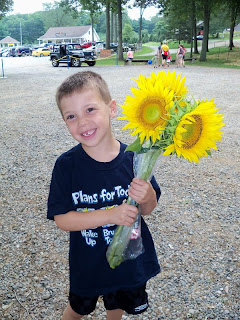 Not only did we tour the farm - seeing chickens, turkeys and roosters but we also got to stop and feed cows. Actually feed cows. The boys were beyond excited and the Bunny Bee was even petting them on the tops of their heads. (I swear he would have taken one home if we let him.) 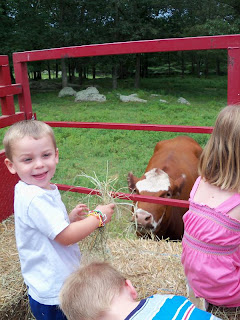 Then they took us around to the field and it just took my breath away. So beautiful. 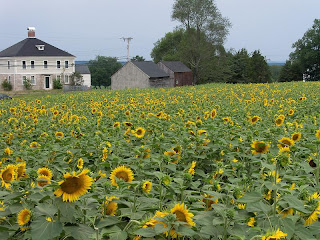 To see the boys enjoying it too made it even better.  After the hayride was over we walked ourselves over to the field and went exploring ourselves. 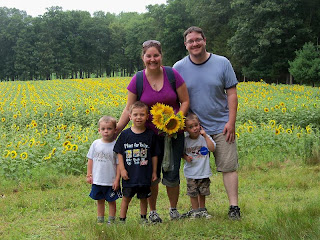 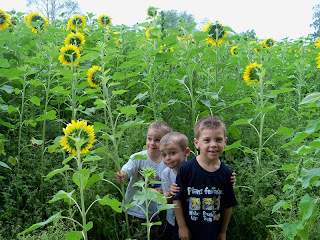 My husband and the kids played 'is your head smaller than the sunflower'... and in most cases, it was! 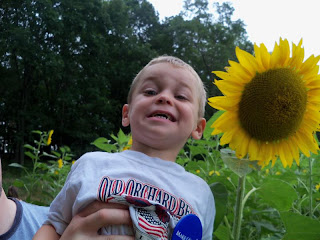 We even found an old water pump that they all enjoyed playing with as well.

We ended the afternoon with a stop at their home made ice cream window where the boys all chose cotton candy flavor. 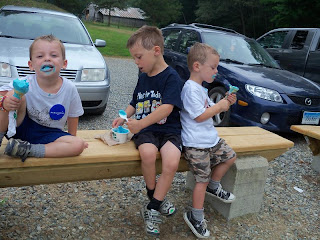 When they were finished they ran around the Christmas trees and rolled down the hills.  Such a wonderful family day.  I can not say this enough, if you have the opportunity to get there, definitely do.  It ends in just a few days, on July 31st.  Not only are you helping out a great cause but it makes for such a nice family day.  We have decided to do this every year from now on. 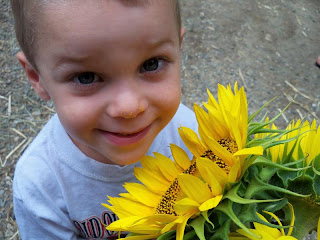