As you have no doubt heard by now, the lockout is over and the NFL will have a season after all.

While I was getting my nails done the other night I caught a segment on the news about the Patriots training camp sessions that would be open to the public.  I sat on the fence about going, worrying over how busy it would be before deciding just to go.  If it's that bad I thought, we'll just walk around Patriot Place and then leave.  The boys and I left just after 8am this morning and hit the road.

To my surprise we were there before 9am.  (I had assumed there would be what I like to call hella traffic since camp was due to start at 9:30.)  We followed the signs for training camp parking and got in the third row.  Even the boys were commenting about how close we parked.  Then we just followed the crowd down to the Dana Farber field house outside the stadium.  The bleachers were not even half full.  The Big Guy picked out a spot on the top and we sat down... and then he promptly realized he could not see a thing in the sun (and Mommy didn't bring hats).

I spotted a hill on the side of the field where there was only a line of people sitting at the bottom  ropes.  We climbed to the top of the hill so we could see everything and sat down.  And then there was the heat.  How did we pass the time?  By letting the boys take their own photos.  Here's one from the Big Guy featuring mostly my shoulder. 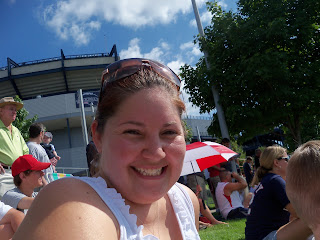 I had been warned about the horrible heat and even packed accordingly for it in my snazzy insulated Pinkberry bag.  (Which I left in the truck... back in the parking lot.  Because - say it with me - of course!)  We sat there for a good 45 minutes in the heat while the Pats were fashionably late and I broke down and waved the guy selling ice pops over. 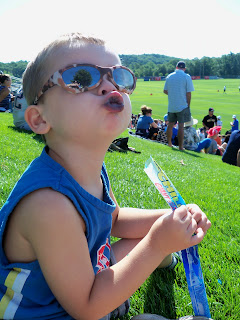 For a moment I died a little inside when I heard the price and realized that meant twelve dollars... for flavored ice.  But then I decided it sure beat the $3.75 ice waters they were hawking and I shelled out the moolah.  It became worth it to me to cool the kids off.  And boy were they happy.  The Pats didn't take the field till just after 10am and I would say the boys made it an additional 15 minutes. 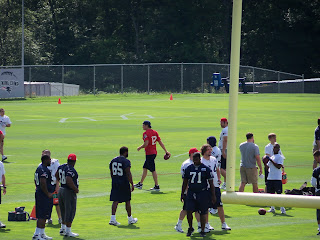 After that, the Big Guy and the Bunny Bee were done.  The Doodle Bop wasn't, but he agreed to go willingly because he was hot.

On the way back towards the parking lot we came across a National Guard tent.  The Bunny Bee stopped me and said 'MOMMY!  A real Army man!!!'  I asked if he wanted to meet him and the look on his face made me so proud.  'Yeah!!!!' he yelled.  Then he stopped to put on his camo sunglasses because they 'matched' the Army guys outfits.  We waited in line only to be cut off by 2 teenagers looking for swag.  I moved the boys to the side and asked the service members if they could talk to the boys for a moment because all they wanted to do was meet 'real Army' men and women.  They were so nice to the boys and it made their day. 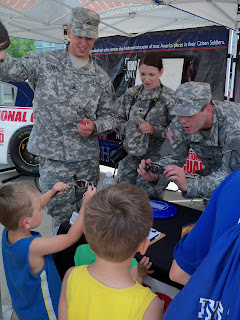 Then we came across the Patriots Experience.  There was a sign stating waivers needed to be signed for anyone under 18.  I told the boys it looked like adult things inside but we could go in and take a look around.  I signed the waivers as the boys got their hands stamped with the Pats logo and in we went.  I was amazed to find other small kids their size milling around and several giant inflatables for the kids to run through as if they were real football players. 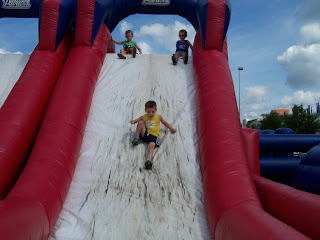 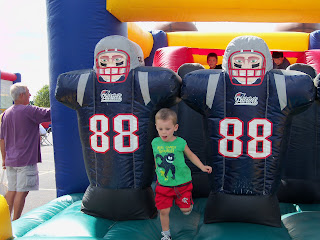 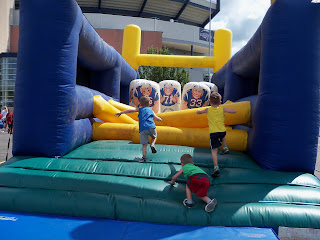 The kids had an incredible time.  I loved every.single.second of watching them try to be just like real football players too.  It was also nice to see them watching out for each other and cheering each other on as they raced through the obstacles.

It started really filling up as we were getting ready to go.  We spotted 2 Patriots cheerleaders and got over to wait in line.  When I tell you it was really just next in line, hi hi, snap a photo, next... the line went quick.  Then it was my guys turn.  The Bunny Bee was feeling incredibly anti social so he clung to me while the other two ran right over.  Those girls were sweet enough to get down on their level and talk to them for a good 5 minutes (my little ladies men).  And then, they posed. 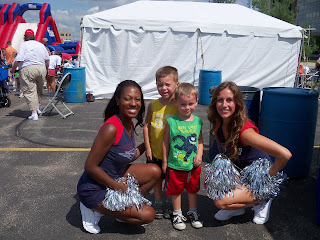 When I tell you this is something you do not want to miss, it's true.  This is yet another thing the boys have asked that we add into the summer rotation.  And the best part, it was all free (minus the $12 in ice pops but who's counting anyway).  If you are free tomorrow you have another chance to join the festivities.  Morning session of camp starts at 10am tomorrow.
Your kids will love it, as will the kid in you.
Posted by Liza at 8:55 PM