I do not know what the heck happened last night, but the 3 boys who usually sleep through the night were all up more times than I could count.  While it woke me up every time, they were really coming to Al more with all of their ailments.  This morning the boys and I decided we should bring him a large coffee at work to help him stay awake and apologize.
After our trip to the office, I dragged 3 overtired boys (see where I'm going here?) ...shopping!

Because of course!  No, because the StyleNight Out Launch Party is tonight and my little honorary man's christening is in about two weeks and I just needed things to wear.  We hit up half the stores in the Warwick Mall (on warp speed might I add) before the boys really started to lose it.

And I may have tweeted something about how shopping for myself with a 5 year old and two 4 year old boys in tow is a special kind of hell... but I digress.

Switching gears we got back in the truck, threw on the air conditioning to cool everyone down and drove over to Kohl's.  Holy sale!  The first thing that caught my eye?  80% off on some of the boys shirts.  They each picked out a Lego Star Wars shirt for $3 each.  Score and a half.  Yaay for cheap back to school stuff.

Then things took a turn for the worse again.  I picked up several things from the racks as fast as I could and threw them all in the dressing room with me while I got to hear really fun commentary from my peanut gallery.  Things like....

And as I tried to change at the speed of light while distracting the boys... my favorite comment... 'No one wants to see that Mom, put your clothes back on!'  (Mind you I did have some clothes on.)

In the end I saved more than I spent so I guess it was a good trip after all. 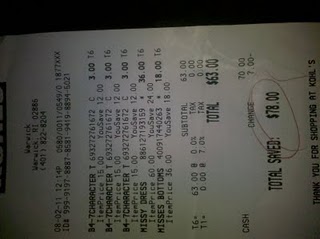 And the boys got cheeseburgers and Frosties on their way home for being dragged shopping.  (Although for that last comment there... maybe I should have skipped the Frosties.)

Tell me my Mom friends... who have boys... what the heck do you do when you have no choice but to take the little guys shopping with you - for yourself.  It doesn't happen often, but when it does?  It's like this.
Posted by Liza at 1:36 PM