This time around you get a whole week of posts about it!  I will be there all 6 days baby!

I looked forward to this for weeks and weeks I tell you.  After last week's drama and craziness and being glued to the weather channel due to Hurricane Irene and all I was no longer feeling the excitement.  Opening Night at the Providence Performing Arts Center was originally slated for Sunday but due to the hurricane it was pushed to Monday.  My mom came to watch the boys and Ana and I were off, just like last time.  Only this time we were seasoned vets.

OK, not really.  But we got downtown without incident after missing only the first show.  I parallel parked (clap for me people, you have no idea what a feat this is!  So what I didn't have to squish in and there was a giant spot waiting, I still did it!) and avoided the parking garage fee.  I walked over cobblestones and this time managed NOT to fall (it's true, I'm as amazed as you are right now), down the street and into the PPAC we went.

I apologized to the girl at the desk for being late and explained I was media.  She smiled, said no problem and sent me to the next girl who told me I was VIP.

Still not sure what that meant but I wanted to shriek.  We went through the doors, took our photos at the step and repeat... how cute are we... 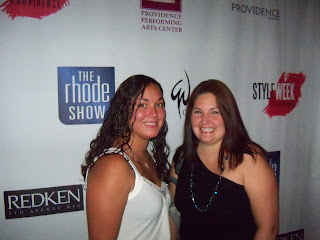 (Side note: Yeah yeah yeah, you've seen that top before.  I have to come up with a week's worth of cute outfits people!  This time around I'm recycling.)

We went right over to the doors only to be turned away by a guy at the door - in front of everyone milling around the lobby.

We hit the bar, got a drink and waited.  By the time I was almost done with my wine we were allowed inside.  When my bracelet was checked we were told to proceed to the stage.  The stage!  Imagine how shocked I was to be seated on stage, FRONT ROW, feet touching the runway.  They actually had to remove 2 girls from our seats because they were supposed to be seated elsewhere.

I had my little Elle Woods moment... am I really here?  How far I had come from January when I was standing in the back of the Biltmore trying to see around people.  Here I was now seated by the cameras and lights.  Just amazing. 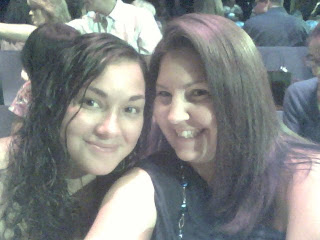 We were able to catch the runway shows for Denise Hajjar, Kara Wickman and Samuel Vartan.  Loved the styles from Denise and Kara... Samuel?  Not so much my taste.  More on that at Buy-Her.

We missed the first bag but got the next two.  So many cool things, haven't even been through it all yet.  $100 gift certificate to Optix eye wear is one of the items.  Yeah I'm about to be rocking some Dolce and Gabbana sunglasses soon!  I don't know what else to say except the night was incredibly exciting and each event I go to it just reaffirms for me more that writing is what I am supposed to be doing.  Words can not express how much I love this and how amazing it feels to get to sit front row and cover this for Buy-Her and even get to talk about it here too.  And Twitter.  Style Week Providence actually retweeted a few of my tweets from the show!  How cool is that?!

I even got to say hi to Audrey and her mom Sharon who were just a few seats down from us.  We also met some really nice girls seated in the row behind us.  Shout outs to Jane from I am the everyday girl and Stephanie Afonso Blanchard!

What was that I was saying about no longer feeling the excitement?!  Scratch that.