Let me set the scene (for a not so Wordless Wednesday).  Two three year olds cried all last fall that they were not old enough to play soccer like their brother, only forgetting about how sad they were once they started hockey.  This summer they turned four and begged to play soccer first with their big brother.

This past Saturday was the first practice - all 3 on the same 'team'.  We started all smiles.  The twins were even showing off their skills.  Half way though?  This happened: 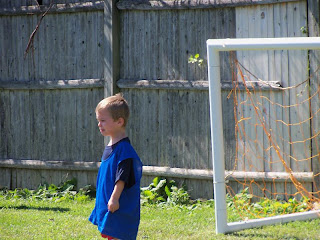 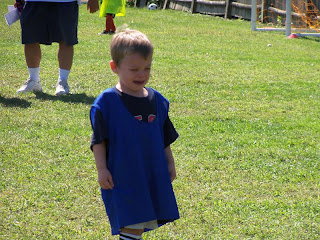 Two hysterical four year olds on the field who felt like they weren't getting the ball enough.

For the last half hour.  Periodically yelling that they were done with soccer and only want to play hockey.  "JUST HOCKEY!"

It's going to be a long fall soccer season.
Posted by Liza at 8:06 PM