I promised y'all a post about this on Wordless Wednesday so here we are.  Monday morning I was in school mode.  Hit the garage door opener, walked outside and noticed a trail of something chalky and green under the truck...which was strange but I was still half asleep.  I pulled the truck into the driveway and noticed I was staring at insulation pulled down from the eves onto the spare car seats in the garage.

Getting out of the truck I walked into the garage and noticed so many things stored inside overturned and on the floor.  Al told me to leave the garage door open for the day to let whatever got in find it's way out.  Sounds like a great idea right?  I was even in and out all day throwing recycling in the bins and more... I made noise.  When Al left for his night job he shut the garage door.

A few hours later?  After 8:30pm (according to my Facebook status) I was praying for whatever animal was in the garage to find it's way back on out.  The living room is connected to the garage and I was minding my own business, sitting on the couch being the digital media girl I am online when I heard it.  Rustling, scratching, something running back and forth on the other side of the wall.  Freaked me out.  I'm Facebooking, Tweeting and IM'ing my husband all at the same time.  He had me open the garage and turn the outside light on.

When Al got home, he went in with a broom - and found a not so trapped squirrel and got him out.  I was all my hero!  (When I was done yelling at him to get out of there because he could get rabies that is.)  The garage gets shut, we're back on the couch and not a half hour later something crashed in the garage.  It's Back!  He went back out and found nothing, chalked it up to maybe a box left teetering.

We decide to call it a night and go watch TV in our bedroom.  Just after 11pm Al was asleep and I was watching who knows what and reading Twitter (don't look at me like that, sometimes I just can't put my phone down)...and suddenly there are these noises.  Loud enough to wake Al up and for me to start melting down.  It sounded like there was an animal in the house.  I went into oh my god my babies mode and picked up my cell as well as the home phone.  One for each hand.

Blinded by panic I tell you.

He looked at me like I was crazy (I was getting there) and kicked open the door that separates the kitchen from the living room.  Nothing.there.  Then the sound moved.  Was it coming from the dining room?  The bathroom?  Sounded like gnawing and scratching - like it was inside the walls or stuck inside something.  And I lost it.  I was overheated, hyperventilating and begging him to get the kids up...we were not sleeping here.  My parents, his parents, I didn't care.  We were leaving.  He called his mom around 11:30pm and I was waking up my poor kids and carrying them to the truck with their favorite stuffed animals and blankets.

Gosh it's hard to pretend you are having some fun sleepover adventure - in the middle of the night - for no particular reason - when your kids keep asking questions you don't want to answer.  We loaded up the truck with whatever we would need for the morning (now that it practically was morning) and went to Al's parents house.  5 bedrooms and they all wanted to sleep together.  We put them to bed in one room and went downstairs to another to sleep.  Like we could sleep after that.

In the morning we told the kids we were having an issue with the water at home and needed a plumber, that we went to Nonno and Abuelita's so they would be able to get ready for school in the morning.  We decided that if we told them what was really going on they would never want to sleep at home again (like me).

That morning after I dropped Al at home and took the boys to school I sat in the Dunkin Donuts parking lot talking to Julie on my cell crying my eyes out about how I could never live at my house again and what a horrible house keeper I must be.  Al worked from home to wait for the exterminator and I spent the day with the kids at Al's parents house after school.  The boys had a blast playing outside with the neighborhood kids and I was able to get work done and a conference call in.  I was starting to like it even.  Who needs home with the wild animals?  I was living here from now on.

To our surprise the guy from the Big Blue Bug (with the pizza eyes as my kids like to say) found nothing. 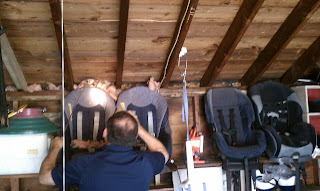 Yes there was a squirrel in the garage who pulled out insulation, but he must have gotten in when the door got opened - then tore everything up.  He didn't come in from the outside somehow.  No he did not have friends.  (In the garage anyway.)  He and Al then went through the whole house.  Al was actually told toys and chaos aside our house was immaculate ... nothing anywhere, no evidence of anything anywhere.  IF something had gotten in it had to be the first time and must have also found it's way out.

This guy seriously rocked.  He could have sold us on any package right then and there but he didn't.  Shout out to New England Pest Control because you have now won my business for anything in the future!  He told Al how to set some mouse traps around the house to see if that caught anything.  Apparently mice can come in through water pipes (pipes people!!!) and this was a precaution. 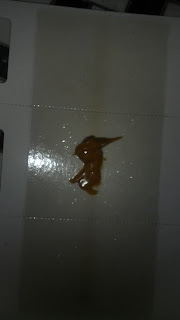 I present you "Peanut butter on a sticky mouse trap".  Mmmm.

You know I refused to sleep at home for a second night.  No way.  I needed to see what was in those traps.  The next morning Al stopped at home and found nothing.  I packed the truck up and took the boys home after school, telling them the water was fixed.  Holding my breath and waiting for them to ask about the 'traps' but nothing so far.  Not even a side eye.

I leave you with a song for the squirrel that has since vacated my garage.  Can not get this to embed from You Tube for the life of me today so click here.
Posted by Liza at 7:57 AM