Not taking no for an answer

Today was the big day.  The Big Guy was getting his first round of botox.

What went on yesterday though?  Is maybe an even bigger part of the story.

We started prepping the Big Guy for this last week.  All he knew was he was going to get some medicine at the hospital that would hopefully make his muscles move better.  Yesterday morning his panic started to set in.  When he panics, it's really hard to calm him down.  Much harder than my other two.

Coming home from school Al called to tell me there was a message that I'd just missed on the machine cancelling the botox for the next day.  And I lost.my.mind.  Hell no this was not happening.  The Big Guy was already stressing out, Al had taken the day off, I had rearranged my schedule, my mom had taken time off to watch the boys during the procedure...  Hell NO.

I called the neurologist's office and lost it on the woman who answered the phone.  She explained that the botox comes from a pharmacy that ships directly to the hospital in advance of the procedure.  In order for the shipment to arrive, that pharmacy has to contact me for my verbal approval - and they said they did not get it so they did not ship it.  Surprise, I wasn't even contacted - nor did I know I should have been waiting to be.

The staff at the office tried their best to keep the appointment for me, even tried to get it approved so we could just use the supply at the hospital ... but red tape - the insurance company said no.  I was in tears.  We rescheduled for next week and she gave me the number of the pharmacy (in Minnesota) and advised that I call to complain.

Which is just what I did.  Immediately.  After sitting on hold with them for like 20 minutes.  A woman picked up and I practically yelled 'Yeah, I have a COMPLAINT!'  And I went off on her even.worse.  I told them it was all their fault and I was not having this, that we were having the procedure the next day as planned.  More yelling and several phone calls later?

I GOT THE BOTOX OVERNIGHTED!  Overnighted people!  Which I was originally told was not possible.  I was so proud of myself.  (And a bit worried I would still get cancelled on in the morning when it didn't come in.)  Like maybe they just said it to placate me.

Last night the Big Guy had a tough night.  Once he found out he would get medicine which would make him sooo tired he would take a quick nap (because no way could I tell him he was being put under and getting injections) he was hysterical.  I hadn't expected that.  It was so bad Al promised to wake him up when he came home from work after 9pm.  We let him have a snack and sit on the couch in the dark with us and watch TV for an hour.

This morning he was furious again.  No smiles, not much to say to me ... and yelled at me outside school when I went to tell his teacher he couldn't have a snack at snack time.  She was so great with him, welcoming him in... even gave him special jobs at snack time so he felt like a big helper.

After we picked the boys up from school early, we dropped the twins with my mom and checked into Hasbro.  I seriously held my breath and prayed as we checked in because I was sure we would be turned away.  But the next thing I knew the Big Guy was getting a bracelet and we were upstairs settling in.  I can not say enough about how nice each person who dealt with him was.

They saw how nervous he was and went out of their way to be sweet to him and get him smiling.  He got to sit in a big comfy chair and play all the Wii games he wanted thanks to the Starlight Children's Foundation.  Amazing. 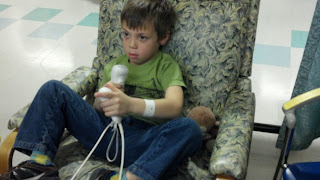 We met the anesthesiologist team, an intern and some nurses who marveled at the Big Guy's sideways front tooth as we had to tell the story of how it was knocked out.  They examined his right arm, right leg and marked both with a pen.  'Huh!  No!  You aren't supposed to write on people!', he gasped and furiously tried to get it off.  I laughed so hard.  Then it was show time.  They told him he could pick one of two vehicles and DRIVE to the procedure room.  Seriously! 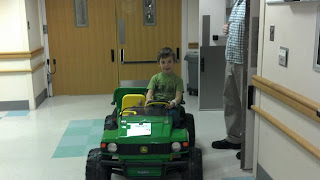 Adorable.  Except for the part where he threw it in reverse and nearly took me down, but hey he's still learning to drive.  He was thrilled until he had to get off of it and walk into the room.  Al went to a waiting room and I went in with the Big Guy who was getting teary again.  We sat him on my lap and I suddenly felt like a celebrity as the people in the room started congratulating me when they realized who I was.  The mom that got the botox overnighted.  No one had EVER made that happen before.  I was a little embarrassed but also pretty proud that I did that for my son.

The Big Guy sat on my lap and got to make 'Darth Vader noises' into a cherry scented mask he picked out.  He could not stop laughing as they turned up the sound of his breathing.  When he was half out he started slow motion kicking and throwing his arms around.  That part scared me.  Everyone jumped to hold him down and they said lots of kids do that.  A long minute later he was asleep and we moved him to the table.  They tucked his favorite stuffed animal Mr. Monkey under his arm which meant so much to me and let me give him a kiss on the cheek before I went to the waiting room.

About 20 minutes later it was all done.  We got to meet him in recovery and were told he would be asleep about a half hour and to let him be.  That lasted all of 5 minutes.  The Big Guy was up and turning and trying to get the monitors off.  I held him until he was awake enough for the Popsicle he'd been dying for.  Red just like he requested. 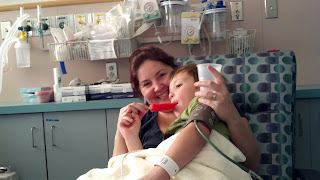 A little while later we were on our way.  He got to pick out two brand new books and instead of a wheelchair ride, he opted for a piggy back ride out of the hospital from Daddy.  We stopped at Burger King at his request and he had a cheeseburger, apple fries and an apple juice.  They told us he wouldn't have much of an appetite but he ate the whole thing.  They also told us he would be really sleepy but that kid was fighting the tired like no other.
He spent some time at my mom's with his brothers and we stayed for dinner to see my dad after Al went to work for the night.  We didn't get home till the boys' bedtime but the Big Guy still had some homework to do.  The twins were great.  They kissed him goodnight and went to bed.  The Big Guy did his homework and then I threw him in the shower.  Figured there are all sorts of germs at the hospital so better late then never, right?  ﻿
When he was all ready for bed I gave him a big hug and told him how very proud I was of him for being such a big boy today.  And I felt teary.  He did amazing for being 5.  I'm not sure what tomorrow holds - how he will feel, if he will be sore... if we will notice any difference at all.  Right now?  I am just so incredibly grateful that we made it through this day in one piece.
Posted by Liza at 8:52 PM