We went on a Farewell Tour at Snip-its yesterday.

It was one of those places I am pretty sure I said you would never find me taking my kids.  But then it seemed like everyone I knew took their kids there.  And everyone had such positive experiences.  In the beginning we said we would take the Big Guy there for his first haircut only, to try and ensure a good experience.  It went so well between the bubbles, animal crackers, lollipops and TV screen that before we knew it we were roped.in.

Really though, when everyone was small it was more like a once a year thing.  All 3 of the boys barely had hair when they were born and it grew.so.slow.  Then it didn't seem to matter.  I was willing to pay the money when we barely had to go.  The last 6 months though?  We've had to get that hair cut just about every 2 months and it gets crazy long pretty fast.

I swear I have the only boys who beg for haircuts - and thoroughly enjoy getting them.  This weekend we said enough was enough.  Snip-its is too expensive when you have to go regularly.  I called around and was sort of shocked to find they didn't seem to be too much higher than other places.  Supercuts charges $13 a kid!

Yesterday afternoon we took the boys in to Supercuts and sat them all down to wait.  The twins handled it just fine.  The Big Guy?  Who full on hates any type of change?  Freaked out.  Tears welled up in his eyes and he started to shake a little.  'I'm not getting my hair cut here', said the kid who just hours before had told me for the hundredth time his hair was too long.  He wouldn't even speak to Al.  I finally got him to sit with me and he clung to me and cried about how it wasn't Snipits and he didn't like it.  'And...and they won't give me a toy', he said quietly.  But I knew it was about more than the toy at the end.

Al and I were torn over making him get a haircut there and walking out the door.  I don't want him to think he can cry and get his way.  But the longer we waited the more upset he got and it seemed like something more than just him wanting his way.  I really felt terrible.  We ended up leaving and the Big Guy burst into full on tears in the car.  Al explained to the boys that we would go to Snipits for their cut but that it would be the LAST TIME... next time we would go somewhere else.  This would be our goodbye to Snipits. 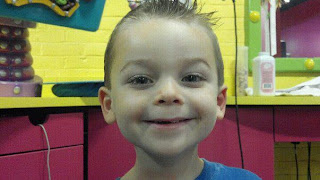 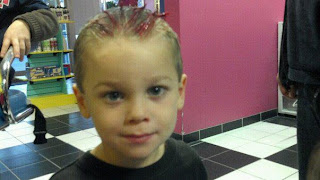 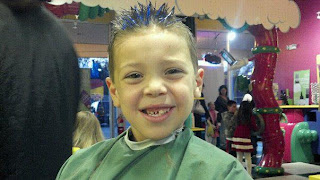