It's a major award!

OK, here it is.  I'm just going to say it.  I have been, on occasion, known to get sucked into things.  Not like a hey can I sell you the Brooklyn Bridge kind of thing.  I don't just fall for Anything you know!

I do however tend to go a little nuts with contest entries from time to time.  Like a bad habit.  I may stop for a few months, but I always.go.back.  And I don't usually win.  (Although we did recently get really lucky with Grinch and Phineas and Ferb tickets.)  There was one time long before Al and I were married that I was yelling for joy on the phone after being told I won ... something... what it is now escapes me.  Turned out they wanted me to send them money to 'claim' it.  Al got on the phone and told them where they could go.

Cut to the infamous beauty expo - also known as Colour Me Gorgeous.  Ana and I entered just about every contest we came across that Sunday.  A day or two later?  My phone was ringing off the hook.  (And still is.)  Hey you entered the giveaway to redo your basement on us ... but 1st we need you to talk to us for a half hour or we can't actually enter you.  Um, no.

There was one number that I refused to pick up for over a week, which called me two to three times a day on my cell and at home (Never leave both numbers folks)!  When I finally did pick it up I was ready to chew them out.  Oh, I won something?  Surrreeee I did!  Ship it to me or lose my number.

But the more the woman talked the more I listened.  I 'won' 4 free airline tickets ANYWHERE that would be good for 2 years, AND a weekend hotel getaway... 3 days 2 nights at most major hotels (Hiltons included, where we occasionally stay) anywhere from South Carolina to Maine.  THAT'S the one that got me.  The airline tickets I thought would be awesome.  We could go see my Grama in Florida and just pay for 1 ticket.  Um, nope wait - you can only use 2 at a time.  Still, 3 tickets for 5 of us?  OK!  And the weekend hotel stay?  Every year we go away for our anniversary somewhere not too far from here, somewhere we drive.  We could use that in March!!!  Free anniversary trip!

The catch.  All you have to do is come to the Ocean Club Resort in Westerly and sit through a one and a half hour time share presentation.  You don't have to buy anything, you can bring your kids, and hey we'll even give you the tickets and hotel voucher BEFORE the presentation!  It's a big developer who has bought the properties and all they ask is that you tell your friends.  Word of mouth sort of thing.

OK!  I do remember a long long time ago sitting through one of those things with my parents - in Florida - for something we were never going to buy.  And in return we ended up with free tickets to Disney or Epcot or something.  This was worth an hour and a half of my time.  Plus while I was in Westerly we could hit the beach with the kids for a walk and leave some flowers on my Grampa's grave.  I like to leave poinsettias at Christmas.  I was all in.  Al took a lot of convincing, but I asked him to do this just for me... that our anniversary trip would end up being free.

So off this morning - just before 9am on a Sunday (his only morning off all week) we went.  We got there 10 minutes before the presentation like they told us to... where I was then made to sign a form that said if my children get out of control and we have to leave early we do not get the tickets and hotel stay.  (But kids are welcome.  Uh huh.)  Bad feeling?  Started right there.

Guess what they didn't hand over.  The stuff before the presentation.  Surprise surprise.  We met a really nice older man who spoke with us all about their timeshares.  Really it was an excellent deal.  But there was no way we were buying (like I told the people on the phone when I made the appointment).  We met his boss who was all smiles and compliments.  We took a tour (which the kids loved), and then we sat through TWO short videos.  The whole time I'm not really looking at Al, I'm just thinking free hotel stay free hotel stay free hotel stay.

The kids were being amazing.  Until an hour and a half later when we are STILL there with no sign of finishing and the big boss comes back over to sell us on it.  Turns out these are all foreclosed properties.  Well then.  Heck of a deal yes yes but money is still money.  We said so many times we were not interested.  The kids started getting a little teary.  It had been too long.

Then the man's whole attitude changed.  'So what you came for was the free airline tickets and the free hotel stay, huh?'  Um, yeah.  He looks at Al and says 'Why did you come'.  I say 'Beacuse I made him.  Because I wanted to see what you had to offer.  It sounded interesting.  AND for the free tickets and hotel.  The timeshare sounds great but we are not able to do it now, maybe in the future'.

This ass had the nerve to say to us if we couldn't afford their monthly time share payments we sure as heck weren't going to be able to ever afford to take a trip somewhere with their airline tickets - because we'd have to use their travel agency to stay at their hotels... and it would be more than we could afford if we couldn't afford his payment plan.  In a really irritated voice.

That was it.  I was done.  And hella pissed off.  Al again told him we would not be buying anything but maybe in the future and he cuts him off with 'Well this is only good for today'.  He said he found 50 people to buy these once (before they had money troubles) and he will find 50 people to buy them again.

Only good TODAY huh.  Of course.

He then hands us the paperwork to take to the front desk after a TWO HOUR presentation and I get handed some stamped paperwork I still haven't really read through about the airline tickets and hotel stay (that coincidently enough does not appear to be good from South Carolina to Maine and there happens to be a lot of Florida locations thrown in there ... but it's all 'driving distance' allright).

We got in the truck and 2 out of the 3 kids burst into tears.  I felt so terrible.  Morning totally wasted.

Remember kids, the next time someone tells you you've won a major award... it's probably gonna look like this. 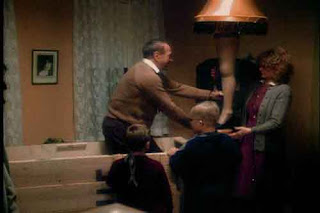