Wednesday morning I was a mess.  Trying to hold back tears, worrying about leaving the boys (even though I knew they'd be just fine).  Also?  I was scared to death to fly across the country - by myself.  When we dropped the boys off at school I snapped this picture of them. 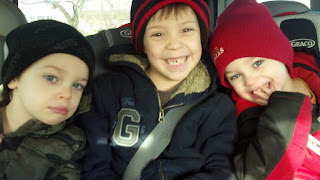 Al took me to the airport and I could no longer hold back the tears.  Which was more about me starting to freak out rather than not being able to be away from them all for 2 days.  I mean I was going to miss them, but I was secretly looking forward to getting to take a bath without 3 boys walking in and out of the bathroom on me.  Several.times.

First flight - tiny plane with propellers.  Quick trip thank god.  Made my connecting flight just in time and scored a seat by myself which was great since it was the long flight.  Turbulence over Colorado but all in all OK.  While I wasn't near a window I did manage to get a peek at the LA Basin which looked pretty cool from the air.  We made it ahead of schedule, only to have to wait on the tarmac over a half hour for stairs to be brought over to us and the luggage to get unloaded.  I wanted off that plane so badly but I also couldn't wipe the smile from my face.  It was sunny and beautiful out!

Crazy things that only happen to me?  My driver (I feel so fancy!) said he'd just gotten a call to wait for another girl but he had no details, did I want to wait in the car or in the airport.  I chose the car, thinking it was parked right outside.

He takes me down the street, into a dark parking garage a few rows in and says he can't leave the keys.  Every piece of my insides were screaming don't get in the car!  This is where horror movies start!  But you know I got in.  Where absolutely nothing happened until he came back later with the other girl... who became my new friend Katherine.  Very sweet.  And did I mention she thought I was only like 25?  How awesome is she!

Checked into the Culver Hotel (where the munchkins stayed when they filmed the Wizard of Oz)!  Got up to my floor where there were guys painting the hallway and my room was no where to be found.  I ask one of the guys who says '612?  Oh you want room 60.  40 minutes earlier that was room 612.  We changed it.'

I laughed at him. 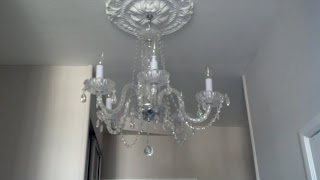 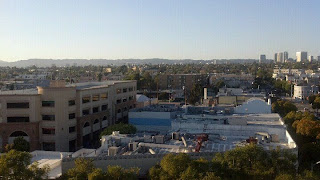 Skyped with the boys and then headed down to the bar for a meet and greet (while cursing myself for not packing something nicer to wear like I debated on).  Got to meet the Neighbor Agency girls Celia and Crystal, who were amazingly sweet.  Finally met Sundry in person, and made new friends with Fitz and Tracy.  After dinner and drinks Celia and Crystal left to finalize things for the Jamba event the next day and the rest of us hit up a local bar before I called it a night.
I thought I would crash right away but I could barely sleep that night.  I was glad the boys called me again to tell me how much they missed me.  And there was Finally an end to gonads and strife.  The mouse was caught thanks to the Big Guy's waking up after hearing some noise and alerting Al.  Disposed of.
Er ...um... I mean sent to roam free with other cute baby mice.
Yeah.  That's the story.  And so ends Day 1 in LA.
﻿
Posted by Liza at 2:55 PM