My oldest baby is six... nearly six and a half actually.  I love this boy more than anything, even though we have butted heads practically forever.  OK, not that long.  But definitely since he could really started talking... and got a mind of his own.  That child argues with me like he's a full on teenager and it has always amazed me.  The twins on the other hand?  They may throw a fit when they don't like the answer, but they eventually listen to me.  Not the Big Guy.  He has always wanted the freedom to do his own thing.

Yesterday we had a particularly tough time before his weekly physical therapy appointment.  He watched me at the desk book a pre-op appointment for his second botox session and he lost it on me.  He was teary eyed, I was teary eyed... and I struggled to tell him that when he gets older he can help make the decisions, but for now he is six and Daddy and I make the decisions about what is best FOR him.  He shocked me by saying he didn't want to do this 'for the rest of my life'.  How does a six year old think in those terms.  His physical therapist Erin is amazing and she helped me to calm him down, telling him its because he works so hard and he does so good that we do this... but we will leave it up to his doctor.

I watched my baby ride around a scooter using the side of his body that isn't as strong and he beamed.  He even told Erin how he was in baseball and we talked after the session about how we were doing a full week of swim lessons before we go down to once a week.  She agreed it was a great idea for his muscles doing it every day this week.  While I know it's great exercise, I thought about how I know he has barely been working to do much in swim and it frustrated me...but I kept it to myself.

Today?  My baby proved me wrong.

Since this is just splash week lessons, I had not mentioned the Big Guy's cerebral palsy.  I save that for whoever his instructor will be on weekly lessons.  He has participated the last few days but he's also the only one with the bubble on his back for flotation in his age group and I felt like I was watching him do the minimum of what was asked.

Today it all changed.  We walked into the pool area and standing there was Lauren, the boys swim instructor from last year.  And she remembered everything.  I was beyond excited to see her.  She made sure the Big Guy tried as hard as he could and cheered him on as I did the same from the sidelines.  She even stopped to tell me how great he was doing.  At one point I got distracted snapping away photos and I looked down to upload some and answer some questions from the twins.  I noticed kids that had been behind the Big Guy in line were now at the other end of the pool where I was... but I hadn't seen him.  Did I miss him?

I looked up to find him only a few feet from where he started, trying and trying but moving so slow. 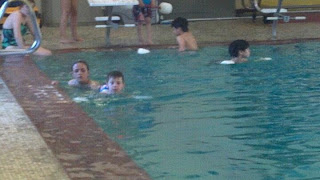 It hurt my heart.  Then I saw that determined look on his face.  He noticed the other kids passing him, but he was going to keep at it.  I kept cheering him on from the sidelines and reminded him what he needed to do.  I walked to the end of the pool and when he wanted to give up I told him he couldn't... that he had to make it all the way over to me and I knew... I knew... he could do it. 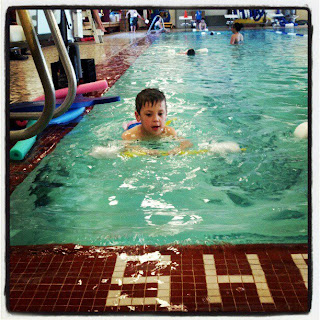 And he did.
I whipped out that camera and I stood there at the edge of the water as my jeans got soaked and I cheered that baby on as I fought back tears.  He gave me the biggest smile when he got to the wall and I helped him out.
I'm so proud of you. We don't ever give up. You are doing great baby. Now get back in line and do it again.
He nodded at me, took a breath and walked back to the other end of the pool.  And he did it 2 more times as the other kids passed him.  My baby did it.  He has amazing determination when he puts his mind to something and its something I hope he never loses.  I want him to fight as hard as he can so he can do anything he wants.  And at some point, I hope he will realize that is why I push him so hard... and we go to physical therapy and doctors appointments and why I am making him learn to swim.
Because I know he can do it.﻿
Posted by Liza at 4:44 PM