Yesterday I had to do something pretty horrifying.

I had to explain life BEFORE CELL PHONES to my children.

I know! I think a tiny piece of me died inside.

After the Big Guy's baseball game, we pulled into a gas station so Al could put some air in my truck tires.  The air pump just so happened to be next to a telephone booth.  While I didn't even give it a thought, the Big Guy yelled out 'What's a telephone doing there like that?  That doesn't make any sense!' and laughed as his brothers agreed.

I took all the boys out of the truck and gave them a lesson.  When Mommy was your age, there were no cell phones.  The boys actually gasped.  Its true.  And if you broke down or you needed to make a call you had to find a pay phone...like this one.  There used to be lots of them then.  You put money in and make a call.

Hysterical to them.  So funny in fact they each had to try it out, while posing.  Check out these faces. 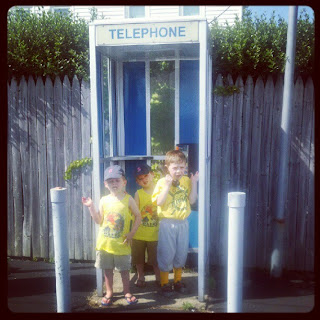 See what I did there?  I gave it the old timey look on Instagram.  Since phone booths are ancient now. 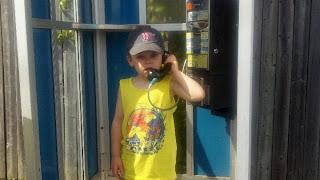 The Bunny Bee took his turn holding the phone.  I was only allowed to snap the photo after he decided on what look he would do.

And here's the Doodle Bop. 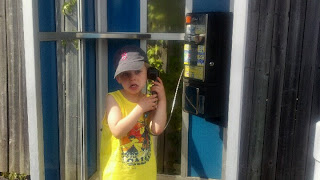 I'm sure we confused everyone at the gas station too.  I got the boys back in the truck, hand sanitized the hell out of their hands and then they asked me when I got a cell phone. 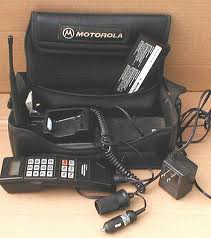 With my already out of date bag cell phone.  But I so didn't care, because I was one of the first teenagers I knew to have a cell phone.  I never did get to have one of those cool pagers before that.  And I have had a cell phone ever since!  My kids don't even believe there was a time cell phones didn't have a camera and the Internet on it.