Who am I kidding. Its always crazy and chaotic.

As you can see from my lack of posting though, I sort of fell off the horse for awhile. That week that Julie was in the hospital, thinking the worst...not knowing she would actually get released cancer free and with an actual diagnosis... it was kind of hard to come down from. Things were OK again, but it didn't actually feel like that. And the Big Guy was sick...and then the twins got sick. And during all of that I tried to start a new diet and I was just beyond miserable.

Trying to balance two blogs, the kids, school, work, the Big Guy's weekly physical therapy he was fighting me on again, swim and baseball? I was beyond drained. I felt like I had so many things to blog about but I just could not bring myself to do any of it. I was going through the motions each day, doing the absolute minimum of what needed to be done and it was all I had. Oh yeah, and two full weeks of on and off migraines that seemed to come out of nowhere.

And I can't forget injuries! The Doodle Bop and the Bunny Bee took apart their hockey net outside this week and as the Bunny Bee used a piece of the PVC piping as a periscope, the Doodle Bop thought it would be hysterical to smack it into his brother's eye. Close call let me tell you. I still can't believe he didn't need stitches - or damage his eye. 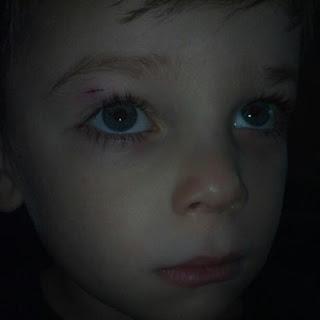 The photo does NOT do it justice. Trust.


I knew I had to make a change but I just couldn't seem to actually DO something about it.

Even now, I can't tell you just what it was, but I felt the change this weekend. (Which I am sure had a little something to do with the sun and finally much warmer weather.) Friday night I was down for the count with another migraine and I couldn't really function. Saturday morning I woke up to find it was actually gone.

We took the boys to Cranston's annual Family Safety Day and they had such a great time. New bike helmets and water bottles... and they got to meet police, fire fighters and paramedics. In the afternoon the boys and I met Julie and the girls at Oakland Beach to enjoy some sun. I can't tell you the last time the kids got to really play, it has been about 2 months (and they ask almost daily when they can play). 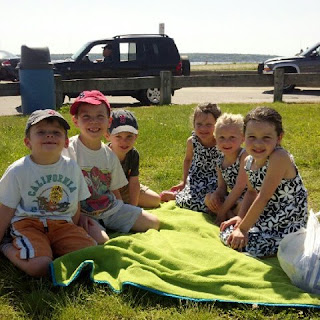 That night Al and I took the boys shopping at Old Navy for some summer stuff and they left totally happy with a few new shirts each. (Yaay for Gap gift cards that can be used at Old Navy that I forgot about ... from 2007 that still worked... coupons and sale items! It was like a giant FREE shopping haul!)

Today we spent time at Al's parents house to celebrate Ana's 27th birthday tomorrow, then went to the Big Guy's baseball game. Giant entourage for that kid. There were 9 of us! Al's parents, sister, my mom, her friend the boys call Nana Lyndia, Al, the twins and I. 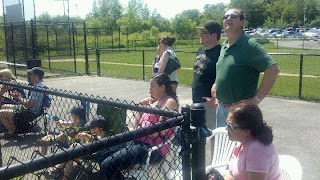 And the Big Guy did so well he was given a game ball at the end by his coach for 'crushing that ball'. The boys are now outside in the yard playing with a giant bucket of water and squirt guns.

I guess I have to say it's been a really great weekend. (And 2 days headache free now. Crossing my fingers!) I think I'm starting to lose some weight so that rocks. And next weekend one of my oldest and dearest friends is getting married and I'm so excited to be there. For now I am trying to get out of this funk, get back to regular postings on both blogs, and be thankful for things. 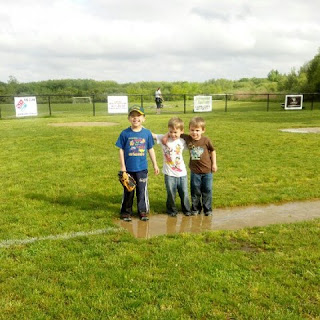 Did I mention I was that cool mom at practice this week who let her kids get soaking wet in puddles?  While all the other parents freaked out?  (One even changed her kid before practice started after he got wet.)  I mean, come on!  They were going to get dirty anyway! 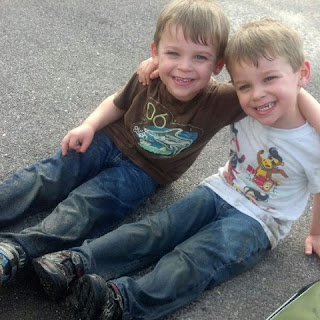 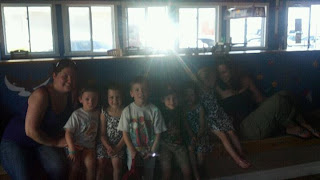 Horrible lighting but I love that it is a photo of the eight of us, with the sun streaming through. 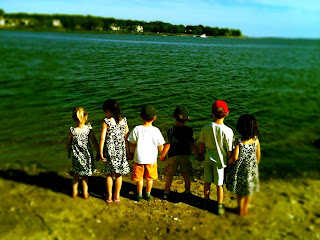 And things like this make me melt.  I love that they all love each other.  And they make quite the gang of kids out in public.
Posted by Liza at 5:17 PM