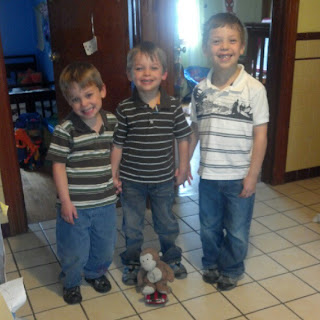 When am I ever wordless on one of these. I know. That stuffed monkey on the car is the one and only Mr. Monkey, which was given to the Big Guy before he was born from Uncle Mike and Auntie LiLi. And he has been attached to the Big Guy since he was old enough to grab on to him.

This morning before school the boys set him up on the car and left him on the living room floor, while wondering aloud if he would do anything while they were at school.

So I decided to mess with them. I know. Mom of the Year right here. Before I went to get them from school I picked up Mr. Monkey and the car and placed them on the kitchen floor by the refrigerator.  I was about to open a juice drink by him for an extra wow from the kids but after I quick count I realized I had exactly enough to get them through the school week.

When we got home I let the boys in and went back to the truck to get their backpacks.  I could hear them screaming from the driveway. He moved! He moved! It was so hard to walk in with a straight face and tell the kids I didn't believe them, that one of them MUST have moved Mr. Monkey and the car.

After having to talk them out of the option of someone else coming into the house and moving them, they decided together that Mr. Monkey must Really be Real!  Like in Toy Story.

Oops.  What have I done.