Yo-mix : The new frozen yogurt giving Pinkberry a run for their money!

I have to have to tell y'all about the new frozen yogurt place in Cranston, called yo-mix.  It wasn't until a little over a week ago I heard about it from my friends at Rhody Mamas.  I happen to live right down the street and had been curious when I saw the signs go up, so it was pretty exciting to see it was opening in just a few days.  You know that I followed them on Twitter right away.

Yo-mix opened a few days ago and I started seeing rave reviews from some friends who live near me.  After the Big Guy's last baseball game yesterday, Al and I decided we would surprise the boys with their first trip in.

You all remember how much I love Pinkberry right?  Still love them.  (I do not however love the still very long lines an entire year later.)  You might want to sit down.  I'm about to let you in on a secret here.  Yo-mix is so good...like Pinkberry good... but dare I say, even better.

Cheaper (only 50 cents an ounce), self serve which makes it fun for the kids, and NO LINES!  Don't get me wrong, it had a steady stream of people in and out while we were there...but there was no clogged up line.  When we walked in, we were greeted by very friendly staff members who showed us around and told us how it all worked.  And they gave the boys bracelets.

So many decisions for the kids, they were in heaven! 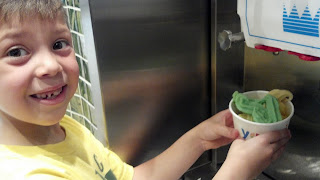 Here is the Big Guy mixing his flavors.

All three of my guys put a few flavors each into their cups and then poured over all of the toppings.  It was then that I smiled and asked if it was OK if I took pictures so I could blog about it. They were so nice about it and said that I could snap away. (And I did!) M&M's, Reese's Pieces... cereals like Coco Puffs... sprinkles, candy bit and so many fresh fruit choices! Here are just some of them.

And oh the fruit! Raspberries, kiwi, strawberries, blueberries and more.

The boys had a field day and I loved seeing them mix some of the fruits in with their yogurt. 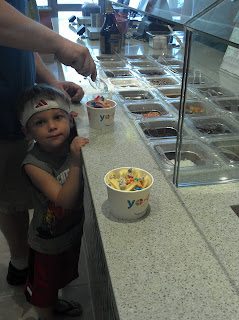 After you finish, you weigh it.  The boys got a kick out of that part.

Then it was time to sit and eat. 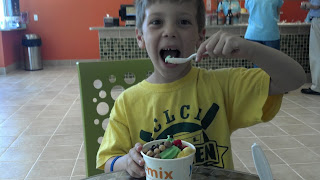 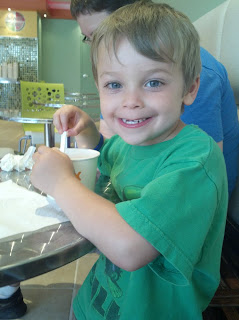 I noticed a giant sign on the wall listing all of their flavors (allergen information included) and asked how often they rotate flavors since they seemed to have so many.  Every 3-4 weeks!  New flavors every 3-4 weeks!

We will DEFINITELY be back again!  In fact, I wanted to write this up for Buy-Her for some national exposure, but right now they are only located in Cranston, Rhode Island.  Yaay for being first!  They are hoping to expand (maybe across the country) in the next two years or so so stay tuned.
Posted by Liza at 8:51 AM