This afternoon was the Big Guy's last baseball game of the season.

I didn't take photos like I wanted to.  I got wrapped up in watching the game, cheering for the Big Guy, calling to the twins to 'stay where I can see you', chatting with my sister in law Ana and even stopping to watch the sky writers ... which in turn made both teams stop to watch the sky writers.  Big oops for pointing that one out too loudly.  Kind of hilarious though.

Just before the game ended I noticed one of the guys that usually coaches sitting near us.  Not coaching.  Not coaching today? I asked.

He was taking a break today.  At that moment I felt like I really needed to talk to him.  While all the coaches had been good to the Big Guy all season, he was especially great - and I didn't even know his name.  I asked which child was his, only to find one of his son's was a coach and the child playing was his grandson.  (All this time I just thought he was an older dad.)

I told him how wonderful we thought he had been with the Big Guy all season and he chatted with Al and I for awhile.  I got all teary behind my sunglasses when he told me what a great kid I had and that in his opinion, he's a natural at the game.  That every week they would talk about who the game ball should go to and every week the consensus was the Big Guy... but they could not do that every time so they would rotate between kids.

I told him how great it made me feel because of the cerebral palsy and he was shocked.  He said he never noticed anything at all and that he is truly a good player.  He also had no idea it was his first season playing.  Once the game was over we watched the kids all gather together 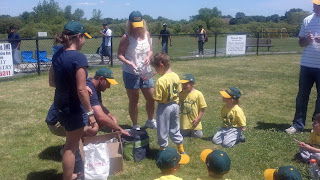 and get a trophy engraved with their name on it. 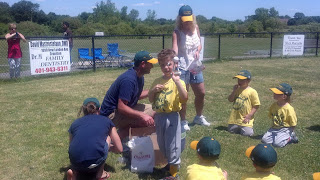 Before we left that coach went over to the Big Guy, gave him a big hug and told him he hopes he keeps playing ball.  Once we got in the car to go home we told him all the nice things the coach had said about him.  And suddenly, just like that, the kid who I made finish this season out even though he wanted to quit... the kid who said he was not ever playing again... beamed and said maybe he would play next season after all.