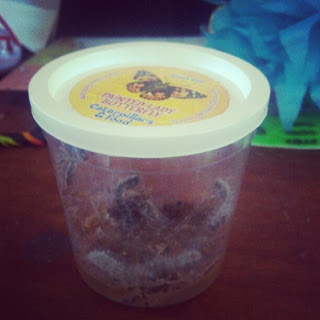 Last summer my brother gave the Bunny Bee one of those grow your own butterfly kits.  By the time I got around to ordering them it was getting too cold so we decided to wait for warmer weather.  Just as school was ending he reminded me (for the millionth time) to order the butterflies.

They shipped out pretty fast and before we knew it we had 5 caterpillars in a jar on our doorstep.  The boys were amazed getting to watch them every day and before I knew it they became our pets.  In just a little over a week we had 5 chrysalids. 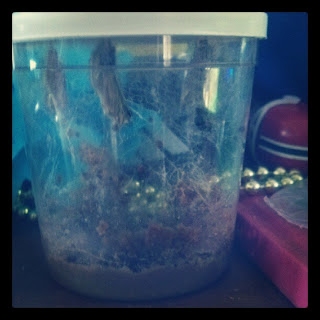 We made Al place them from the jar into the mesh habitat.  The boys and I didn't want anything to do with the stink that would surely come from opening the jar and taking them out.  The boys liked to watch the chrysalids shake from time to time and could not wait for them to start hatching.

The timing could not have been planned better if we tried.  Tuesday morning (the twins fifth birthday), we checked the habitat before we took a trip to the dairy farm and we still didn't have any butterflies.  We came back from the farm later that morning and the boys started screaming.  Which scared the hell out of me.  I ran over and realized they were screaming with excitement. 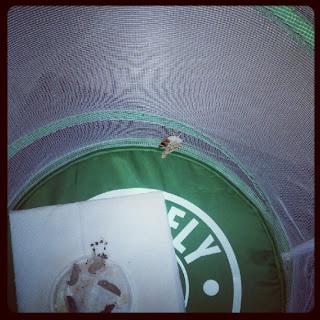 The first baby butterfly had hatched ... on their birthday.  The Bunny Bee was so proud he made me take a photo immediately of him standing next to it.  Look at that cute grin. 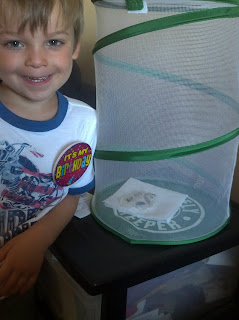 That afternoon the boys were again yelling.  They swore a butterfly was about to hatch.  Best decision I think I ever made was to place that habitat in the living room next to the couch.  Had they not been watching TV at that moment we would have missed it.  In fact, this is the only one we actually got to watch 'be born' right in front of our eyes.

And you know the boys made me take a video.  For the blog.


Four of the five became butterflies that day, with the fifth making his debut two days later.  We have been adding some flowers and changing the sugar water.  I had to have the conversation with the boys that this morning will be the day we have to let them go.  We can not keep them in the habitat forever, they need to fly free.  Which was met with tears all around.

We decided that before the Bunny Bee and Doodle Bop's birthday party today, we will take the habitat with us to my inlaw's house.  They have a giant back yard full of trees, flowers, fruit trees and an amazing garden.  We will release them there so they can live and maybe the boys will be able to see them from time to time.

I pray I am not going to have three heartbroken kids.  Hopefully they will say goodbye, get distracted by the party... and it will be OK.  I'm also hoping that from now on whenever they see a butterfly at Nonno and Lita's house, they will think it is one of theirs and be happy.