Only at the drive-in

Just a mention of a drive-in makes me think of the 1950's.  Happy Days.  Or Grease.  Like I want to start belting out Beauty School Drop Out.  My husband on the other hand, thinks of the final scene of Pee Wee's Big Adventure.  Can you tell that neither of us had ever been to one before?

When I was small my mom would talk about how she and my dad used to go to the local drive-in that closed down the year I was born.  (Way back in 1977.)  The last movie she saw there was Saturday Night Fever.  So yeah.

Growing up I had no idea there were any drive-in's left in our state.  But that wasn't the case.  There was the Rustic Tri Vue Drive-In in Smithfield.  I've known about it since college but never thought to go.  On the boys summer list landed going to a movie at night.  Shortly after that I happened to see that one of the local radio stations 95.5 WBRU was hosting a night where you could get in for $15 a carload (vs the usual $25 which is still a bargain).  For TWO movies!

Not having a clue how early we should arrive, we packed up the boys last night and waited in a car line just before 7pm outside of the drive-in. 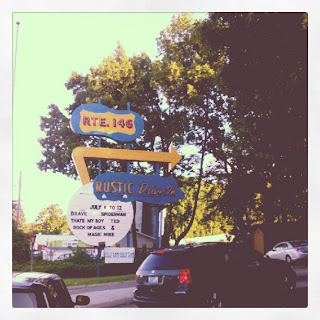 And man were there some characters there.  Before the movies start is prime people watching time!  Not only did I have no choice but to overhear numerous conversations, we watched someone trying to pawn off pitbull puppies (in hand) to people, AND (my personal favorite) an overpacked car full of adults blasting LMFAO while a young child danced and wiggled on top of and all around the car.  ﻿

They say the movie starts at sundown, but that isn't quite true... it was more like an hour after sundown...9pm.  For the boys who are in bed by 7:30pm this was huge.  Hopped up on candy and popcorn they were in it for the long haul and LOVED getting to sit in the back of the truck.  And checking out the WBRU table. 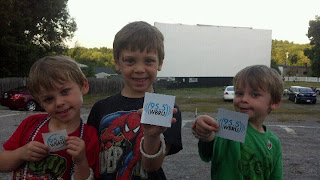 I joked with Al that if The Amazing Spiderman got boring later I would just go sit on the other side of the truck and watch Magic Mike on another screen.  I didn't need the sound.  And HOW did we not know this place existed as high schoolers?  That is what I really want to know.  (Mom you didn't read that last part.)

We got to watch Brave first, which the boys thought was awesome. 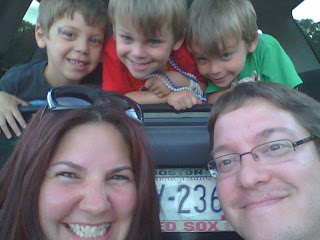 The Bunny Bee has been perfecting his Scottish accent since the very first preview and thinks its hilarious to bend over and yell 'Feast your EYES!'  It was adorable to listen to them giggle from the back of the truck.  By the time the movie ended we debated on leaving, but the boys were wide awake and geared up for Spiderman.  After a bathroom run we decided to stay. 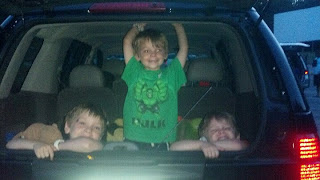 It was the little things like this that made my heart melt. 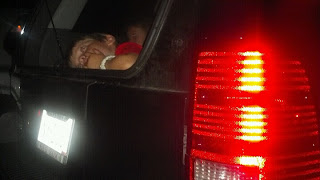 I would say about 10 minutes into Spiderman the twins were bouncing all over the truck...then things went suddenly silent.  I turned around to find the Big Guy smiling at me and pointing to the boys.  Totally passed out. 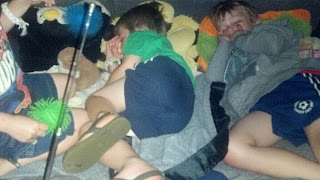 The Big Guy lasted half way through Spiderman before he crashed out too.  Impressive that he made it to just about midnight though. 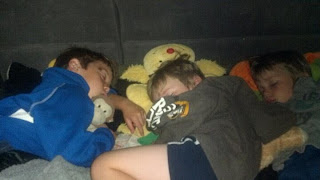 It was not until well after 1am that the movies ended.  And in case you are wondering yes I did happen to watch a few minutes of Magic Mike and no you did NOT need the sound. Just sayin'!

When it was time to go, we lifted the boys out of the back of the truck and strapped them into their car seats.  The Big Guy lost a flip flop in the process and we didn't notice until we
were home. Remember the days where you could just lie in the back of a truck/station wagon/van?  No losing flip flops then...am I right?

Anyway, we were home a little after 1:30am and put the boys in bed.  I wasn't asleep till after 2am and you know the boys were up at the usual time this morning.  How that happens I will never know.  I am dragging today.  But it was totally worth the night with the boys.  Loving the summer list.