Today the boys and I did something new.

I had promised the poor kids when I went to New Mexico that I would take them to the beach at least two times after I got back - before I left again for NYC.  Well, its been two weeks and though the weather has not been horrible it has not exactly cooperated with our schedule.  And we haven't been once.  Today was our last shot.  With temps in the low 70's and cloudy skies, I figured that meant 60's at the shore making for a chilly day.

The boys were so upset this morning, even though I had warned them today did not look good.  I had to pull out something fun and new.  With almost no gas in my tank.  Because that is what my husband is for - he pumps.  Don't look at me like that.  I do it when its absolutely urgent - at the 7-11 only.  Don't ask.  You don't even want to know.  Trust.

I put out the call to my girls on Facebook and got tons of comments which was so sweet.  One of them suggested Slater Park in Pawtucket.  Long story for another day, Pawtucket and I are not fans of each other.  I knew about where the park was but had never cared to go... and couldn't imagine it being a nice spot.  And it had been at least 6 years since I had been over that way.  She had me at 25 cent carousel rides, a petting zoo and a playground.  How could I refuse.

I googled the address and we were off.  To Slater Mill.  Because googling Slater Park gets you to Slater Mill.  Where this happens so often they have a printout of how to get yourself to Slater Park.  Which only got me lost further with a quick tour through Central Falls before I pulled my GPS back out and off we went.

Finding the carousel (from the 1800's) the boys could not stop grinning as I told them it was one of the oldest in the county.  I asked the girl behind the counter, Is it Really 25 cents a ride?  She smiled and nodded.  I handed over enough change to get the boys each 4 rides.  The man running the carousel held the ride for us and then we were on.  Those grins from the boys? 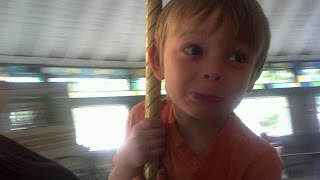 Turned into a near freak out from the twins.  The Doodle Bop's face starts to say it here. 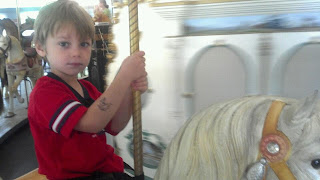 I have never been on a carousel that spun so fast.  The Big Guy however, loved every last minute of it.  After the first ride the twins were off, but the Big Guy stayed on for two more rides. 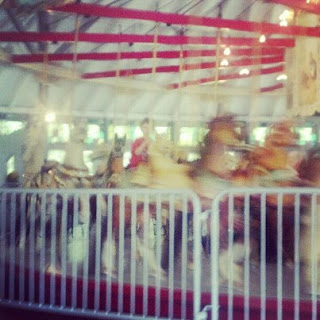 We decided to save the rest of the tickets for another day.

From there we drove over to the petting zoo.  Growing up practically a few blocks away from Roger Williams Park Zoo I had no idea Slater Park had a zoo back in the day.  All that is left now is some smaller farm animals but it was still adorable.  Disclaimer, you can't actually pet - or feed - the animals, but the boys still loved it.  Giant piggie, chickens and roosters, fish and donkeys. 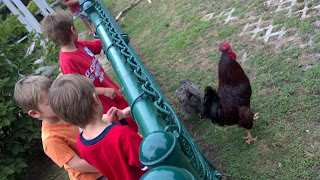 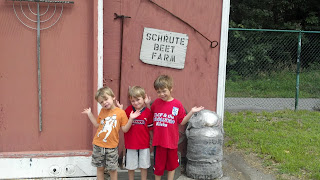 And what is really cute is they have this mass of small toddler toys - climbers, rideons... if only I had known about this when they boys were tiny.  All the little ones just run wild.  On second thought, maybe its good I did not know then.

After the animals, we decided to walk on over to the playground because it was not that much further.  I thought it was cute to see the little greenhouse and how affordable the food actually was.  Most of the time when I hit somewhere like say Roger Williams Park, I stay far away because of the prices.  This really wasn't so bad!

The playground was adorable... several slides, awesome climbers...even a rock climbing wall for kids.  My guys however were in flip flops (my bad for not thinking ahead and putting them in sneakers).  Next time we will go in sneaks and have AT it!  They played on some of the things but gave up at the rock wall in flip flops. 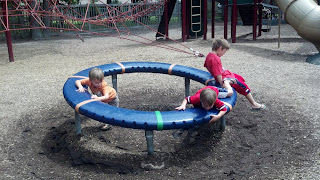 I call this one below Rock Wall Fail. 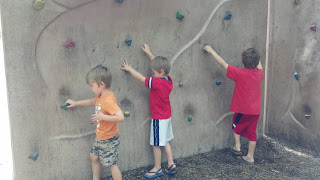 Bottom line?  We actually had a really awesome time. 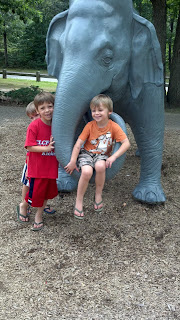 Two hours of mostly free fun with a stop at the giant cannon thing that was so big the boys all took turns sitting in different spots after I hoisted them up. 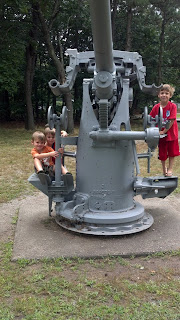 I definitely feel like I missed out not going here before and realized how important it is to discover different places near where you live.  Except for Slater Mill... because I was not paying the nearly $10 per kid for 5 and 6 year olds.  Maybe when they get bigger.

Stay tuned for more this week as I recap New Mexico with Mercedes Benz... working on coming up with a good title for that.  Wondering how The Desert is where they bury all the bodies will go over... hmm.... maybe I'll have to keep working on that one.  And Thursday I head to NYC with my girls so there is so much to come!!!  Stick with me y'all!
Posted by Liza at 9:13 PM