I can hardly believe that I have tucked the boys into bed, summer is over and school begins in the morning.  A whole new school for the boys.

I wanted to make today special for them, especially since I have spent so much time away this summer.  I dragged myself out of bed for a final summer day spent at the beach - but in the end I could only rally for a half day.  Crazy waves and the sky was a really pretty color that kind of melted in somewhere with the ocean.  I explained to the boys it was the hurricane coming up the coast that made everything look the way it did.

At first I hesitated about letting them get in the water.  I am not a strong swimmer and the waves were scaring me.  We settled on how far they were allowed to go out while I stayed in the water with them and they were off on their boogie boards.  Surfing.  The Bunny Bee kept yelling Mommy!  I am having the best day of my entire life!  And I tried to pretend I didn't notice as the Big Guy inched back further and further to catch a better wave. 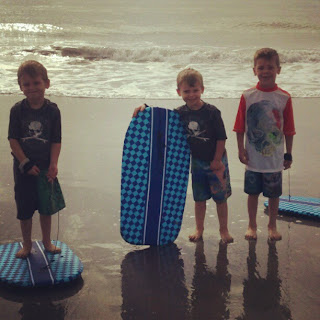 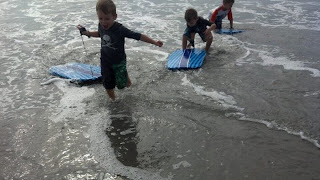 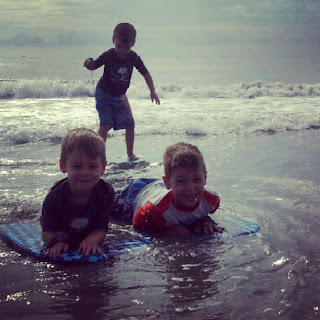 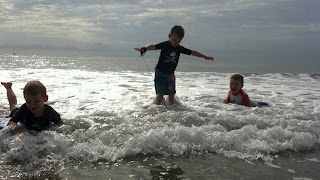 On the way home we hit up Dunkin Donuts for the Oreo filled special all around.  Once we were home and showered up, the new school jitters set in - beyond anything I have ever seen.  The Doodle Bop was teary and telling me how he did not want to go somewhere new, the Bunny Bee kept asking about his old friends... and the Big Guy actually put himself to bed.  For the entire afternoon.  The kid that will try refusing sleep when he has a high temperature and can barely keep his eyes open, just because.  That kid slept for a few hours in my bed, then put himself down in his until dinner.

At dinner we had a big family talk about how it will be OK being in a new school, that they will make friends.  The whole thing broke my heart for them.  After dinner we took a long drive by the farms and the water and the twins passed right out.  Getting home they all decided on their first day outfits and we put them to bed.

I can hardly believe that in the morning, I walk my oldest over to first grade...full day school!  And that in the afternoon?  Al will stop home on lunch so he and I can walk our baby boys to Kindergarten.
Posted by Liza at 8:14 PM