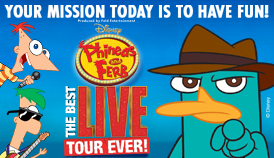 Disney's Phineas and Ferb The Best Live Tour Ever! was today at the Providence Performing Arts Center. The boys LOVE Phineas and Ferb. After having a great time at the show last year, they spent the morning at home watching Phineas and Ferb cartoons to prep for the show. 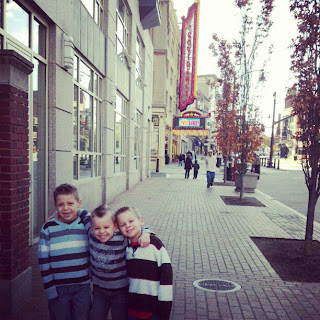 We got in about 10 minutes before the show started and the boys were excited to see some of the dancers up on the stage entertaining the audience before the actual show started. It made the time pass faster. We even ran into Keekoin and one of her girls briefly!

The boys got some cotton candy and hats courtesy of Daddy and the show began. 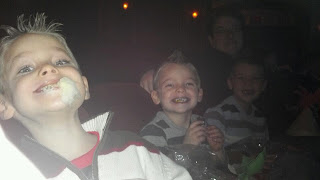 What I love about this show is that it is fast paced for the little ones. It begins with everyone sliding down a magic slide that takes them from behind the TV to outside the screen where the audience is.  Lots of singing, dancing and jokes to keep things moving. To keep the little ones from getting frightened, Dr. Doofenshmirtz is always saying something funny after his evil music. If you watch the show at home enough, you will even be able to sing along with most of the songs in the live show!

After the show I asked the boys what their favorite parts were. The Big Guy's was when all the inventions were jumbled together in the special machine they had and it broke, shooting confetti out. All of the boys loved Baljeet's bollywood dance with elephants. The Bunny Bee decided he loved it all so much he just couldn't pick one thing. The Doodle Bop? Loved the potty humor with Baljeet saying he had to pee but didn't have time.

Though we saw the show last year and we remembered pieces - like Candice's hilarious "SIMP Squirrels In My Pants" - we still didn't feel like we were seeing the exact same show. I tend to think they made some little changes to mix it up a little from the year before. At any rate, even if it really was the same, we had a wonderful time. This is a great show! 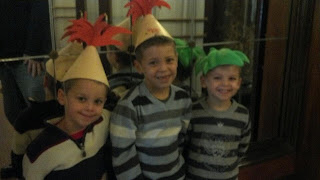 If it comes back to the PPAC next year, I have no doubt the boys will again be asking to go!

*Disclosure: We were provided with free tickets for the show in exchange for my blogging/tweeting and other social media promotions about it. Opinions are all my (our) own.