Our trip to Disney on Ice: Treasure Trove

Yesterday was opening day for Disney on Ice: Treasure Trove at the Dunkin Donuts Center in Providence. The boys and I hit the 1pm show with Al getting to join us at Disney on Ice for the first time since he happens to be on vacation this week!

I won't spoil the whole thing for you, but I do have to say that while the show last year was good, this year beats it hands down. LOVED it! Mickey, Minnie, Donald and Goofy opened the show with several skaters getting the kids up on their feet and ready - followed by a treasure hunt of Disney stories.

The boys flipped when the Incredibles came out. It was huge for the Bunny Bee since he was Dash for Halloween this year. From there we got to see scenes from Alice in Wonderland, The Little Mermaid, The Lion King, Aladdin, Snow White, The Princess and the Frog, Peter Pan and more!

The boys said their favorite parts were seeing Peter Pan and The Lion King. The costumes from the Lion King were amazing. Wildebeests, giraffes, birds... all skating around at top speed. The boys were mesmerized. And the special effects. Highlights for them also included the colored fog and the fireworks. (Yes, I said fireworks.)

My favorite scenes were with the skating cards in Alice in Wonderland and the entire Snow White portion of the show. No matter how old I get I still love when the prince lifts the top of the glass coffin and kisses Snow White to wake her up.

This is a show you won't want to miss! In fact, you still have time to get there today with the next show at 3pm. Shows run now though Sunday and you can get the schedule here. 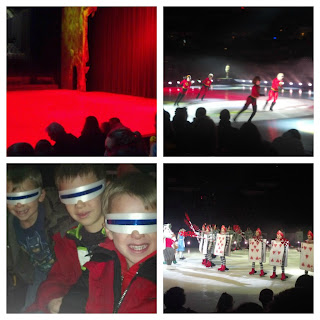 ***Disclosure: We were given tickets in exchange for blogging about the show. Opinions are all our own.
Posted by Liza at 1:03 PM