Over the weekend it was beyond freezing. Too cold to possibly snow. Bitter. While we had an awesome time in Boston the kids were feeling like frozen Popsicles. It actually had to warm up to snow... which it did. The boys were thrilled to come out of school earlier this week to snow and I let them spend the entire afternoon outside after they got all their snow gear on. They came in just in time for dinner, just as the snow was changing over to a cold rain.

That photo on the right? The boys realized they left all their summer squirt guns in a bucket - which was now a frozen solid block of ice after the rain and then freezing weather. 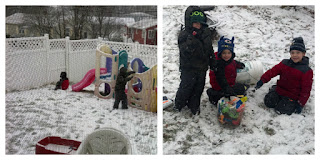 Fast forward a day or so to yesterday. I was in a sweatshirt all day. It was that freaking warm! So then of course that means something else was going on - last night we had hurricane or tornado force winds. We started losing power just after 9pm last night which sent me into panic as I was trying to get things done online. Each time it would come back on, it would go off again shortly after that.

Rain. Wind. Crazy crazy wind. Pretty sure something in my backyard crashed but I don't know what yet. At some point the power went out completely and we were woken up by the Doodle Bop's terrified screams when he realized it was too dark. Three kids in bed with us and we barely made it to school on time.

I can not tell you how lucky we are that we can see the schoolyard from the front door. No delay yet our power only came back with less than a half hour to spare. I ran the Big Guy across the street as the kids were going into school and the twins laughed at how windy it was. Small branches littered the street and my neighbor had their gutters torn and hanging from the side of the house.

After that I drove to Dunkin Donuts... because coffee is the ONLY way I am getting through this day. It is still warm out for January. I wasn't cold in my sweatshirt. 60 degrees. Tomorrow though? 35 with a chance of snow possible.

Welcome to New England. Where else can you get such a range of temperatures in less than a week.
Posted by Liza at 10:32 AM