The adventures of Captain America

Yesterday just might have been the craziest day we have had yet. 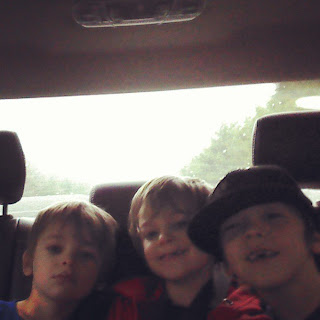 two hours of traffic before we hit our destination. Talk about being tired before your day really even starts. Stress that comes with it aside, the day was beyond amazing. My face is sunburned from spending the day in the sun, but I am so thankful it turned out to be such a great day weather wise.

By the time we were on the road to head home again, it was past the boys bedtime and we still needed to stop for dinner. McDonalds at 8pm on the road was the best we could do. 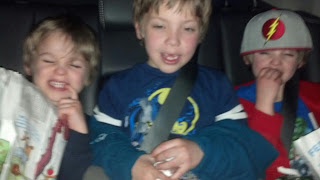 We didn't get home till after 9pm. The boys burst into the door yelling Captain America's name. Followed by screams of Ewwww!

I'm saying it now. We totally had our reservations about leaving a puppy home for an undetermined amount of time. Though we are crating, knowing it would be a a really long day didn't seem fair to leave him in the crate when he's still getting used to it. Al made a huge space for him in the living room, complete with food, water, pee pads, toys, his blanket ... all enclosed by the big superyard we used to use for the boys. He called it Captain America's Palace for the day. And just in case he got out (though he assured me it was not possible) he blocked off the kitchen door.

Guess what y'all. This puppy hopped the superyard. He can barely hoist himself onto the couch most days, but he could hop the superyard ... which is Higher than then couch. Because of course. In fact, from the looks of the living room he may not have spent a full 20 minutes in that enclosure before going on to wreck the living room, pee on my sweater and cover half the room (himself included) in poop.

We got the kids to bed, Al started cleaning the living room and I dragged Captain America into the bath tub. This 22 pound puppy fought me like crazy and I ended up just as wet as him. I'm also sure he was not.sorry.at.all. Just upset he had to get wet. Look at this face. It says Mommy is torturing me. 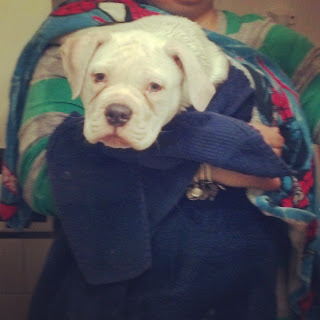 By the time I finished getting him dry it was after 10pm. And I don't think Al finished cleaning till about 11. Don't even get me started on the issue of Danny's dream light that should not have been in the living room. (If anyone has any tips on how to clean THAT without ruining it, I would greatly appreciate it.)

I would like to say the night calmed down after that... but you know it didn't. This morning I nearly lost my ish on the boys - and the dog - none of whom slept in at all after getting so little sleep. The first thing I did after getting the Big Guy to school was get.coffee! And now I am trying to get caught up from yesterday.