Thankful Thursday! Changing it up a little today because there are some things I feel like I need to say first. It has been a week since I posted last. I actually have a few posts in the can ready to go, but was waiting for different reasons. Monday morning I got a post written about the boys and the dog but then Boston happened and it didn't feel right.

In fact, nothing has felt right since then.

It took such a toll. Born and raised in Rhode Island, a piece of my heart has always belonged to Boston - especially with what we have been doing with the boys lately. Red Sox, Fanueil Hall, The Freedom Trail, the North End ... Al and I used to love spending entire weekends there. Something about living in New England, having everything so close, you feel a part of it all. The morning of the Marathon I debated on taking the boys down. I felt braver after all of our recent traveling and thought I could do it OK without Al (who was at work). I then started to think about how much I hate crazy crowds and decided we should just skip. Plus I had work to do. Maybe next year I decided.

I took a break from work and the boys and I met Al on his lunch break, then we were back home again. From my laptop, with the Bunny Bee next to me, I caught a blurb online about a possible bombing at the Marathon. Could not be. I couldn't turn on the news so I started asking my girlfriends what they heard. Once I realized just how serious it was, I put the boys in front of a DVD so they wouldn't see anything by accident and turned on the TV in my room. I was horrified by what I saw. And sick to my stomach. Blinking back tears all I could think was that I had almost taken my kids.

The girls and I were glued to our laptops talking while watching the reports, all of us in disbelief. I was IM'ing Al. This just was.not.happening.

While we managed to keep any knowledge of Sandy Hook from our kids, we weren't so lucky with the Marathon coverage. I shielded them from the TV reports, we didn't talk about it in front of them, but I forgot all about radio coverage. (They boys go to sleep with their radios on at night... during Sandy Hook I remembered to put on Cd's... not this time.) I didn't know they knew a thing until we were sitting at the Rhode Island Blood Center the next day. They asked why so many people were donating blood. I simply said that there were lots of people who needed some and they asked people to come in and help.

It wasn't until we were in the truck on the way home that they asked about it again - and mentioned that they had 'heard things' on the radio about people getting hurt badly at a race. I struggled with what to say. I told them I hadn't wanted to talk about it, that I didn't want them to be scared of anything. I told them at the Marathon someone exploded some things (I could not say 'bomb' to my little kids) and lots of people got hurt. A few died. Mommy donated blood to help the people who got hurt get better. 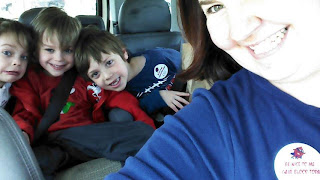 They nodded their heads. I explained that this does not happen all the time and again, I didn't want them to be scared. That they could ask me anything. They told me they would not ever be scared, because whoever did that was the 'baddest person ever' and once the police catch him no one will ever do bad things like that again because he will be in prison forever.

We went into Dunkin Donuts and right at their eye level sat the stack of newspapers with the photos from the day before splashed across them. The Bunny Bee's mouth opened. I just grabbed him and moved him along. I don't want you to look at those things I told them. I don't want you to watch it on TV either. Promise me that if you are changing channels and see something you change it right away. Disney, Nickelodeon and Cartoon Network only - do you hear me? Again they nodded. I hate that I even have to talk to them like this. The Big Guy often turns on the news (we have had chats about this) because he likes to see them do the weather. I explained that I do not want them talking about this at school because we wouldn't want to scare kids who may not know or understand.

And I made it my mission to make sure the boys got their mind off all of it. Easier said then done. They have talked about it daily. They want to know if all the people are better and if they have caught the bad guy. All I can say is they are all getting better and they think they will have the bad guy soon.

Yesterday we went to the beach. Today we had a family day. I still can't wrap my head around Boston and I don't think I ever will. I am running my first 5K in a year next weekend and the thought of the boys at the finish line scares me. But I know that that is no way to live. They are excited to come watch and watch they will.

I know this post doesn't exactly fit into the usual Thankful Thursday, but trust me when I say I am beyond thankful for everything that I have ... this week has really hit that home. I am thankful that we were not at the Marathon on Monday and that my kids don't have the images of being there and the panic in their heads. I am thankful that my babies are not scared, and that they still believe there are not more people out there in the world who would do things like this (when the rest of us sadly know different). I am thankful I can hug my husband and boys. I am thankful for April beach days. 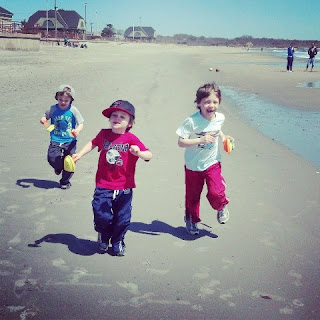 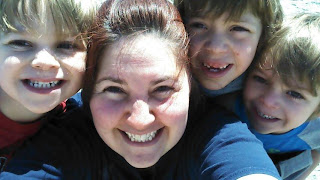 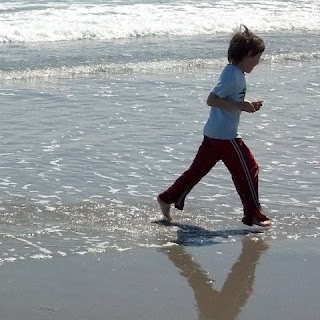 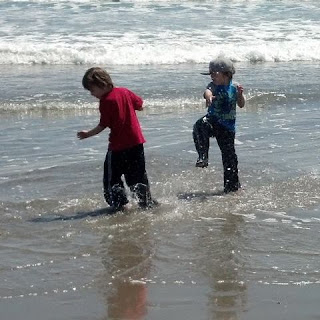 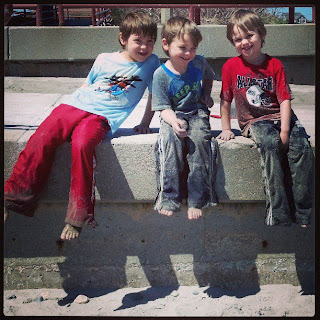 I am thankful for crazy kids. Chaos as usual. An insane puppy. Every last bit of it.

And even if we are technically Rhode Islanders, I still consider us Boston Strong.

I am thankful for it all.